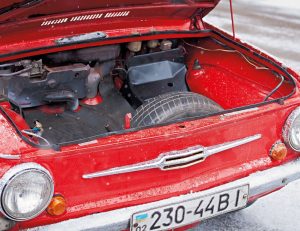 The Soviet motorist, even if he had saved up money, didn’t have much of a choice: Volga, Zhiguli (Lada), Moskvich, and Zaporozhets. If the owner of a Volga was rightfully considered a rich man, and Moskvich or Zhiguli owners were well-to-do, well, the owner of a Zaporozhets couldn’t really brag about his car to his neighbors. Small, noisy, and cramped (for the back-seat passengers), the car didn’t impress, even in times of extreme shortages, and it was the subject of many jokes. Even the head of the Soviet Union, Nikita Khrushchev, called the Zaporozhets a “tin can.” After that remark, the Zaporizhzhia Automobile Building Plant (ZAZ), which, by the way, had previously produced only agricultural equipment, immediately began developing the second Zaporozhets model, which turned out to be the most ubiquitous. It didn’t become more prestigious, but it quite suited the residents of small towns, not only because of its low price, but also for its ease of repair, relative reliability, and sturdiness, which was especially important because of the lack of good roads throughout the USSR. 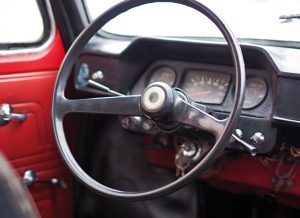 A characteristic feature of the Zaporozhets was its engine.

Its light weight (about 800 kg / 1,800 lbs), short wheelbase, and ground clearance of 190 mm (7.5 in), like modern SUVs have, allowed the driver and passenger to push a stuck car out of the mud without any difficulty.
A characteristic feature of the Zaporozhets was its engine: V-shaped, four-cylinder, air-cooled, and located at the rear. Doesn’t it remind you of a Porsche 911? But unlike the German sports car, its power was small even for such a compact car – 40 liters in the most popular model. It took more than half a minute for the Zaporozhets to accelerate to 100 km/h (62 mph).
Almost three and half million Zaporozhets left through the factory gates throughout its history. The last one – in July 1994. In 1998, ZAZ became a joint venture with Korean Daewoo and started producing modern cars. Twenty years later, in 2018, it stopped production of passenger cars because of the economic crisis.