Zakarpattia is a unique land.

Zakarpattia is a unique land of magnificent mountains, beech and pine forests, stalactite caves, and thermal springs.
The administrative center of Zakarpattia is Uzhhorod, one of the oldest cities in Europe, which was founded in the 8th century on Castle Hill. The architecture of the city was influenced by the different rulers of the land over time – Czechs, Hungarians, Croats – and it is distinguished by a variety of styles. In the historical part of the city, Petofi Square, in the historical part of the city, has been famous since the mid-17th century; its bright old houses are impressive, with medieval ornaments and stucco. On Kapitul’na Street is the famous 14th-century Uzhhorod Castle, in which there is a museum with examples of weapons from the 14th to 20th centuries, old books, domestic items, collections of folk instruments, Zakarpattian clothing and embroidery, as well as the monumental Cathedral of the Holy Cross (17th century). Not far from the castle is the openair Museum of Folk Architecture and Life, where you can see architectural monuments from different regions of Zakarpattia: an 18th-century church; bell tower, school, and water-mill from the late 19th century; a blacksmith; tavern; and Hutsul, Boyko, Hungarian, and Romanian houses with authentic household items and interiors. 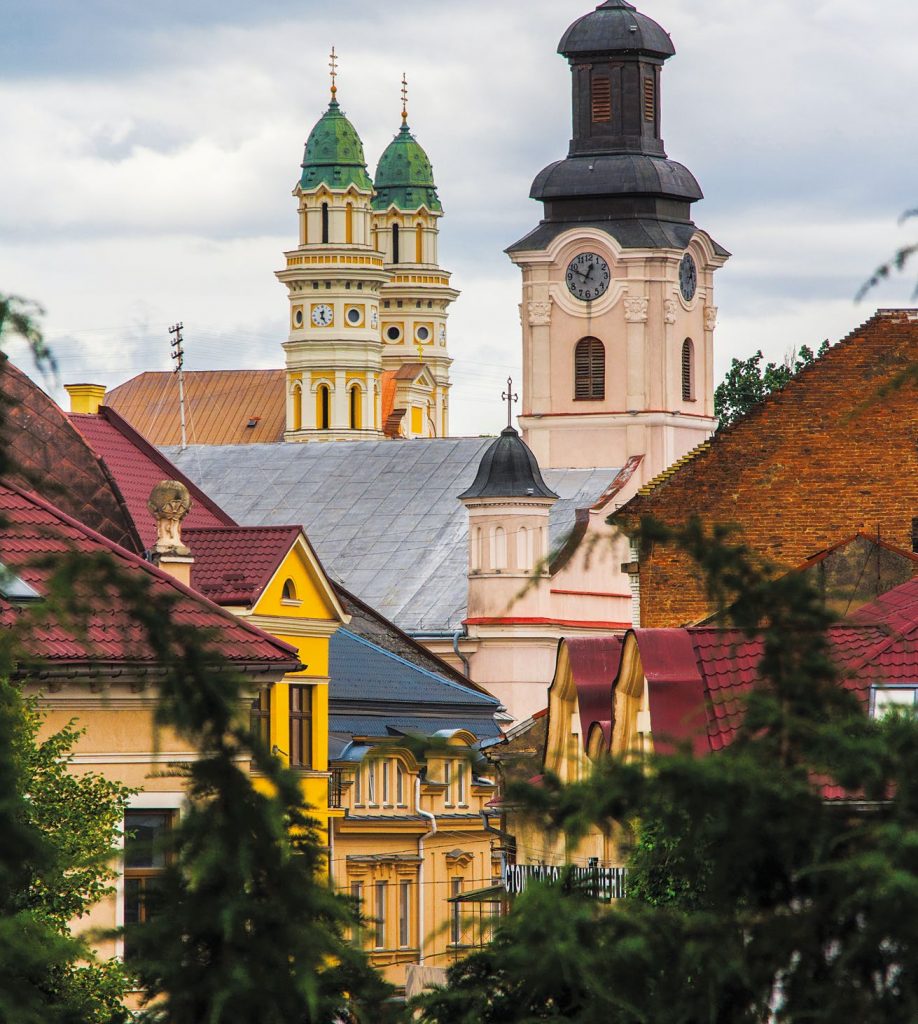 Colorful Voloshyna Street has the Roman Catholic St. George’s Church and Passage of the famous shoe magnate Tomas Bata. On Ivan Olbracht Street there is the Botanical Garden, known for its extensive collection of rare plants. Previously, this street was called Basement Row, and there were wine cellars along here. Wine tasting festivals are held in Uzhhorod. Connoisseurs will also appreciate Uzhhorod coffee, brewed according to a special recipe, Czech knedliky, bograch, and Slovak sztrapacska, as well as sweets from the Valentin & Valentina Shtefanyo confectionery. Every spring, tourists from all over Ukraine and Europe come to Uzhhorod in May to see the cherry blossoms, and a month later, for the linden alley (the longest in Europe, 2,200 m / 1.4 mi). Everyone knows that from the middle of May, Uzhhorod turns into a blooming and fragrant garden for a whole month.