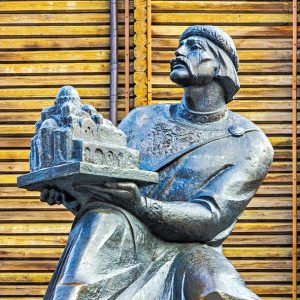 The history of Yaroslav the Wise.

The name of Yaroslav the Wise (978-1054), son of Vladimir the Great and Princess Rogneda of Polotsk, is rightly linked with the height of Kyivan Rus’.
Being the Prince of Novgorod, he rebelled against his father and refused to pay him tribute. After Vladimir’s death, he claimed the Kyiv throne after four years of internecine struggle with his brothers. He ruled from 1019 to 1054, that is, longer than anyone else.
During his reign, Kyiv become one of the largest, most prosperous, and well-known cities in Europe, the center of culture and art at that time, a rich commercial industrial city-state. The population and the area of the city increased dramatically; new defenses were built, including the famous Golden Gate, or the “Gateway to the Sky.” It was called “golden” for the gilded dome on the gate church, and “gates to the sky” because every morning the sun shone through it, symbolically scattering the darkness from the city of the Virgin Mary. 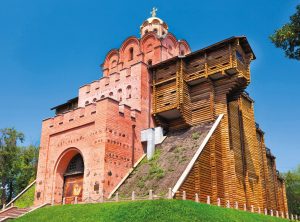 In memory of Yaroslav’s decisive victory over the Pechenegs, which liberated Rus’ forever from their invasions, St. Sophia Cathedral was built, one of the principal sacred places of the modern capital. He created the first set of laws, known as “Rus’ Truth.” There is a legend about the famous missing library of Yaroslav the Wise, which was as prestigious for historians as the Amber Room or the manuscripts of the Alexandria Library. Yaroslav was called the “father-in-law of Europe”; he intermarried with all the influential European rulers – the kings of Sweden, Poland, Hungary, Norway, Germany, as well as the Byzantine emperor. And the destiny of his daughter Anna, Queen of France, served as the plot for many literary works and feature films, and is already well-known. Yaroslav is buried in a huge six-ton sarcophagus of proconnesian (the most durable) marble, originally belonging to Pope Clement of Rome. This sarcophagus still stands in St. Sophia Cathedral in Kyiv, but the fate of the remains of the prince himself is up for speculation. In Soviet times, the tomb was opened three times for the purpose of scientific study. After it was last opened in 2009, researchers found a woman’s skeleton in it, presumably Yaroslav’s wife, the Norwegian princess Ingegerd (in Rus’, Iryna).
The Orthodox Church declared Yaroslav the Wise one of the faithful saints, and the secular leaders of independent Ukraine placed his image on the 2 hryvnia bill.