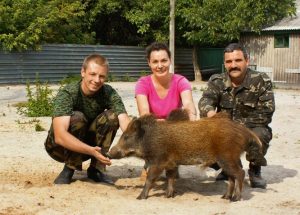 Borka is one of Wild Animals in Exclusion Chernobyl Zone. Borka (namesake of the famous Chernobyl catfish) was found as a youngster in the vicinity of a forest fire. The piglet was “assigned” to the fire station yard. He grew up the in the company of horses, dogs, and cats. He was often seen traipsing along with a dog behind the firefighters’ wagon through the city streets. Employees and visitors loved being photographed with him. In 2009, Borka was taken for filming of a French documentary about nature in the Exclusion Zone. He was supposed to “play” a wild boar. Three locations were set: a city, a village, and the forest. The city was filmed in Chernobyl, where the pig walked thoughtfully along the roadway and sidewalk against the background of the five-story building on Kirov Street. The “village” was also filmed in Chernobyl, but in a residential neighborhood. Borka was marking the fence, while the film crew was standing 40 meters (130 ft) away; the gate suddenly opened, and an old samosel woman looked out into the street. She didn’t see the crew, but Borka saw that he was a meter (3 ft) away from her. The grandmother sternly chastised the boar, “What are you doing?! Those are my flowers! Go on, get out of here!” The director was delighted. 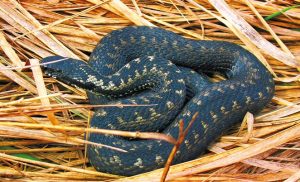 The forest was filmed near town. And then the unthinkable happened – in the last scene, Borka ran away. It was very awkward for crew – the firefighters had shared their pet, and the crew lost it. But everything worked out. Two days later, at night, Borka showed up at the main checkpoint. In 2015, this boar died. For almost 10 years, he entertained the Zone workers and let them see the world of nature a little closer, to understand that wild animals are not so scary and not so dangerous.