The history of Vydubitsky Monastery.

The Vydubichi neighborhood was first mentioned in Russian texts as far back as 1070, in connection with the construction of the Krasny (Red) courtyard – a country seat of the Grand Prince of Kyiv Vsevolod Yaroslavich. Now, here is the Central Botanical Garden of the NAS of Ukraine named after academician M. Gryshko. One of the stories says that the name Vydubichi comes from the wooden pagan idol Perun which was thrown out of the chapel into the Dnieper River after the Christian baptism of Kyivans in 988. Perun was a persistent fellow and resurfaced (“vydybnul” in Ukrainian) washed ashore just in front of this very hill. 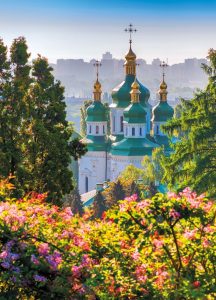 Next to the lower part of the Red courtyard stood the monastery, the patrimony of the Monomakh dynasty.This was burned down by the Polovtsians in 1096. The monastery was restored and developed over many centuries. Later, many of the Princes became patrons of the monastery: Vladimir Monomakh, Vasilko Terebovlyansky, and Danilo Galitsky. In 1199-1201, a strong supporting wall was built to protect the monastery from erosion caused by the Dnieper River. The ancient stone Mikhaylovsky (St. Michael) Temple is preserved to this day and the necropolis has also partially survived. This part of the monastery was built in the 18th century. Its majestic buildings are pleasing to the eye, for they are not only a natural looking addition to the surrounding landscape, but are also outstanding examples of sacred architecture.