The history of Vladimir the Great.

For his most important act, the baptism of Rus’ in 988, Prince Vladimir was canonized, becoming equal to the apostles, and he became known in history by the names Vladimir the Great, the Baptist, and the epic Vladimir the Fair (or Red) Sun.
However, he himself cannot be called a model Christian. Son of the militant Svyatoslav and the captive daughter of a Drevlian prince Malusha, he was not considered the main contender for the throne of Kyiv and seized it by force in a bloody feud with his brothers. He took Rogneda of Polotsk for his wife by force, killing her father and brothers. In the beginning of his reign, he reformed the pagan religion and erected numerous temples. Also, the talk of the town became his “harem” – 800 concubines, who lived near Kyiv in Beryozov. Legend has it that when Vladimir decided to convert Kyivan Rus’ to a new faith, various clergymen came to him: Jews, Muslims, and Catholic and Orthodox Christians. A big lover of women, the prince almost accepted Islam, but he was allegedly stopped by the ban on alcohol. And, saying that “the joy of Rus’ is drinking,” he chose Orthodoxy. Baptism itself also did not proceed painlessly. According to legend, “Dobrynya was baptized with a sword, and Putyata with fire.” Here, by the way, the epic hero Dobrynya is mentioned, an historical figure who was Vladimir’s uncle. 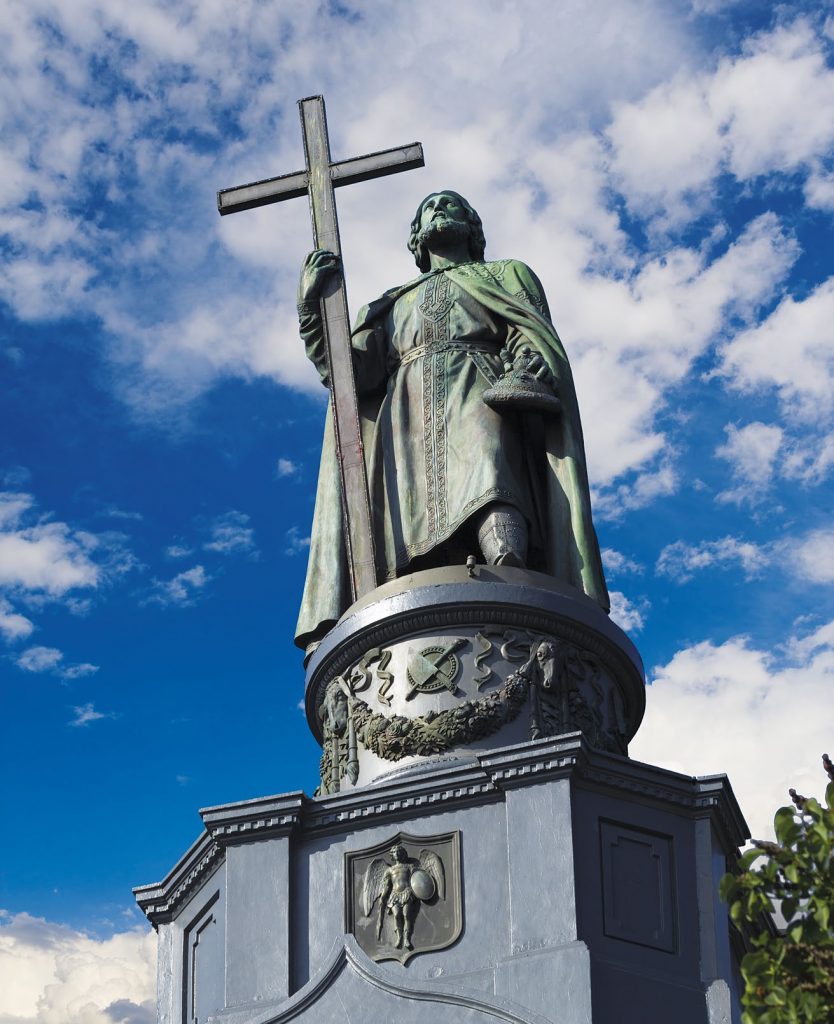 Today in Kyiv, at the foot of St. Vladimir Hill, at the place in the stream where the prince baptized his children, stands a monument to the Baptism of Rus’, also known as the Magdeburg Rights Column (built in 1862). And the place where the waves of the Dnipro swept away the idol Perun is still called Vydubychi, because the pagans ran after the wooden statue along the river and prayed, “Vydybay (Arise), god!”
A monument to Prince Vladimir (erected in 1853) stands on St. Vladimir Hill, one of the highest Kyiv peaks, and the huge cross in his hand is visible from far away. This is the oldest surviving monument in the Ukrainian capital.