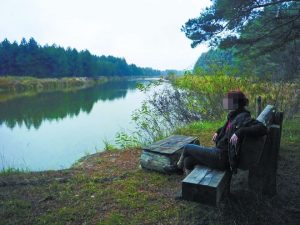 The ancient name of the Uzh River (Water Snake) was Usha. It remains only in toponyms of the ancient town Ushomir on its shore. The Uzh is tortuous and not very long – only 256 km – with a basin totaling 8,802 sq km (3,120 sq mi). Its depth ranges from shallow waters where the river is only knee-level to quite deep and dangerous places with fast flow. 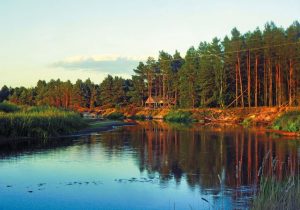 The Uzh River is a real boundary of the Chernobyl Exclusion Zone.

Previously, there were numerous health resorts and recreation centers along the shores of the Uzh, such as “Skazochny”, abandoned after the accident, as well as settlements, including Chernobyl, the infamous “capital of radiation”, and currently relocated Poliske and Narodychi. As a result, the river flows in quite a large gap through the territory with a radiation background much higher than the permissible limits. In fact, the Uzh is a real boundary of the Chernobyl Exclusion Zone, which explains the years-long plan to cut down the shoreline.