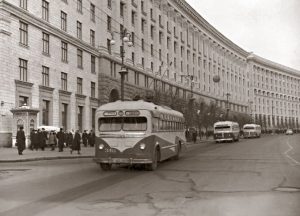 The history of the Kyiv trolleybus.

The trolleybus, as well as the tram, has always been a favorite of Kyiv residents. Many like it even more than the tram for its environmental friendliness and almost complete absence of noise. Today in Kyiv there are 45 day and 4 night routes, which are serviced by four trolleybus depots and almost six hundred cars. The fare for 2018 is 8 hryvnia (approximately 28 cents). The history of the Kyiv trolleybus began in November 1935. But until the 1950s, it was seen as more exotic than other forms of transport. In 1937, there were 393 trams but only 17 trolleybuses in operation. But after the war, the trolleybus fleet was expanded and updated, and the number and length of routes significantly increased. So the trolleybus took over as the dominant form of transport. In 1966, the world’s first trolleybus “train” (consisting of two trolleybuses) was introced according to the model proposed by Kyiv inventor Vladimir Veklich. 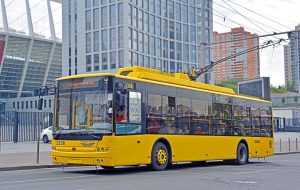 Until the 1990s, the Kyiv trolleybus fleet consisted mainly of various models of Czech Škodas (9T, 14T and others). Currently, Škoda can still be seen on Kyiv routes, but most of the trolleybus fleet are now Ukrainian “Kyiv-12” and its variants developed at the Antonov Design Bureau in the early 1990s. These were manufactured by the Aviant Kyiv factory until 2006. More modern low-floor LAZ and “Bohdan” trolleybuses are now produced there.