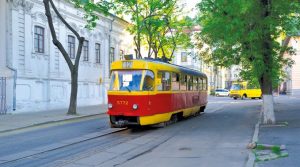 The first electric tramcars appeared in May 1892. This was the first electric tramway in the former Russian Empire and the third in Europe. The first horse-drawn tram was tried 1891, but a pair of horses were not enough to pull the tram up the Bohdan Khmelnytsky Street hill. An attempt to solve this problem by doubling the horsepower to four was not successful. Next came a steam powered tramcar which only remained in service until 1895 as it was very noisy, scared horses and the population, and polluted the air. Between 1911 and 1941, several types of petrol tram were in operation, but after the war they did not return. The hilly terrain of Kyiv with its steep ascents and descents made tram operation difficult especially in bad weather. Finally, the electric tram provided the perfect solution and in 1975, the USSR’s first light rail, or fast tram started running. The long routes, which connected the right and left banks of the Dnieper, and downtown to Pushcha-Voditsa parkland were especially popular with Kyivans. Moreover, the tram was the cheapest way to get around. A single ride without time limits cost only 3 kopecks (5 cents). There were even fans of the round trip which lasted for hours on end.

The tram was the cheapest way to get around. 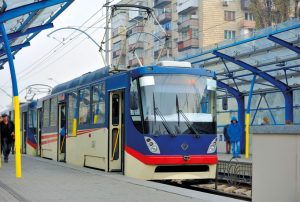 In the 2000s, the number of tram routes was sharply decreased, and the routes were divided among several other forms of transport – buses, minibuses and trolleybuses. The rolling stock has not changed much since the 1960s. Various Czech-made Tatra passenger cars, are mainly used. The Tatra T3 is most common which were produced between 1960 and 1999. These are the distinctive red-and-yellow cars, which merrily rumble along the city’s street. The tram ride fare is equal to that of buses and trolley buses, and in the autumn of 2018, a ride cost 8 UAH ($0.35). There are conductors or ticket inspectors in most trams. They sell and punch your ticket or passengers will punch their tickets themselves when boarding the tram.