The TV Tower in Kyiv

In November 1951, a complex of television studios that afforded a highdefinition television image was built on Khreshchatyk of Kyiv. A 180- meter-high TV tower was erected at the same time (it was later dismantled). In 1968-1973, a new tower with a height of 385 meters was built in its place in Syrets neighborhood. The present-day television complex was erected nearby, and its main building was popularly dubbed as Pencil due to its original architectural design. The mass of Kyiv’s TV tower is rather impressive – 2,700 tons. Its structure is unique since it was welded, and therefore it is the tallest structure of its kind in the world. It contains not a single bolt and rivet. The TV tower was built by so-called top-down construction method, i.e., without cranes and helicopters. First, the finial was mounted; then, the powerful jacks lifted the already assembled components of the structure; yet another tier was built, and everything came around again. And finally, the tower bearings (“legs”) were installed in a vertical position, and the construction was completed. The experienced welders and fitters performed all works under the supervision of specialists from Paton electric welding institute of Ukrainian SSR Academy of Science. 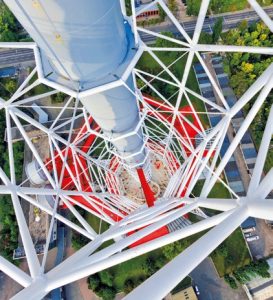 The Kyiv TV tower, one of the highest in the world (ranked 8th), is capable of withstanding enormous wind loads and powerful earthquakes. The tower can be seen from many parts of this great city and became one of its symbols.