The Sculptures of Kyiv 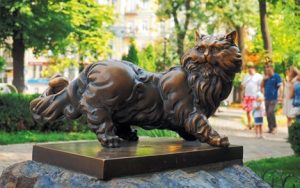 The history of Kyiv Sculptures.

Until 1991, this former capital of the USSR republic was subject to strict city design rules. On its streets and squares, only “ideologically aware” statues of state and party leaders were permitted with just a smattering of others. But after gaining independence, Kyiv was in rush to make up for lost time. Either at city expense, but more often from private donations and Kyiv resident funds, a wide variety of more relaxed “fun” sculptures appeared. Among them are monuments to favorite book and film characters and the actors/actresses who played them. 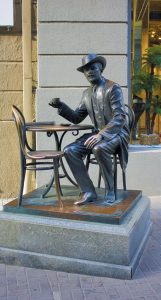 These include famous Panikovsky statue (from the film “The Golden Calf”) on Proreznaya street, Pronya Prokopovna and Svirid Golokhvastov (from the film “After Two Hares”) near St. Andrew’s Church, the brave soldier Schweik at the Franco Theater and a monument to military pilots, using the image of the hero of the cult film “Only old men are going to battle”. The second group of urban sculptures are even more fun. Firstly, as a rule, they are not cast from metal and not carved from stone, but made from scrap materials. Secondly, their main purpose is simply to enliven the urban environment and they serve many people as “companions” for a souvenir photo. One of the most well-known is the Hedgehog in the Fog – a character from a Soviet cartoon, loved by generations of Ukrainians. Many of these light hearted sculptures live in Landscape Alley, occupying a special art space. 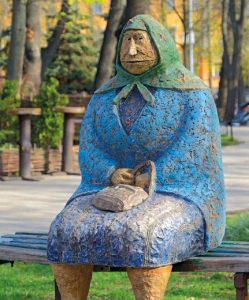 Also here you will find the Princess and the Pea; the Little Prince, and fish, zebras, and cats. There are tributes to the Rose-colored glasses in the Pechersk Landscape Park and to the shoes of an insurance agent on Belorusskaya Street. Symbols of the city are also commemorated such as the Blooming Chestnut in Mariinsky Park. And recently, a cute project “Shukai” (“Search”) has been launched in Kyiv. Mini-sculptures of local specialties are being placed all over the city – chestnuts at the entrance to city hall or a Chicken Kyiv on Gorodetsky St. Gorodetsky himself sits nearby – in the Passage, at the table, drinking coffee from a bronze cup.