The Racing Circle in Kyiv

The Racing Circle is unique sports facility located a 15-minute walk from Golden Gate metro station was completely derelict until 2017. Today, it is open once more for amateurs and professionals alike. The first Kyiv cycle track – the cyclodrome – was opened in 1899 and there the Kyiv Cyclists’ Society ran its first races. A second cyclodrome was built in 1913 on the site of Afanasivskyi Yar on the initiative of Kyivan Ivan Belenko. The track belonged to Avangard sports society and close to the track they set up a workshop for the rental and repair of bicycles, motorcycles and cars. Later, th beautiful Polar Star summer theater complete with an orchestra appeared. 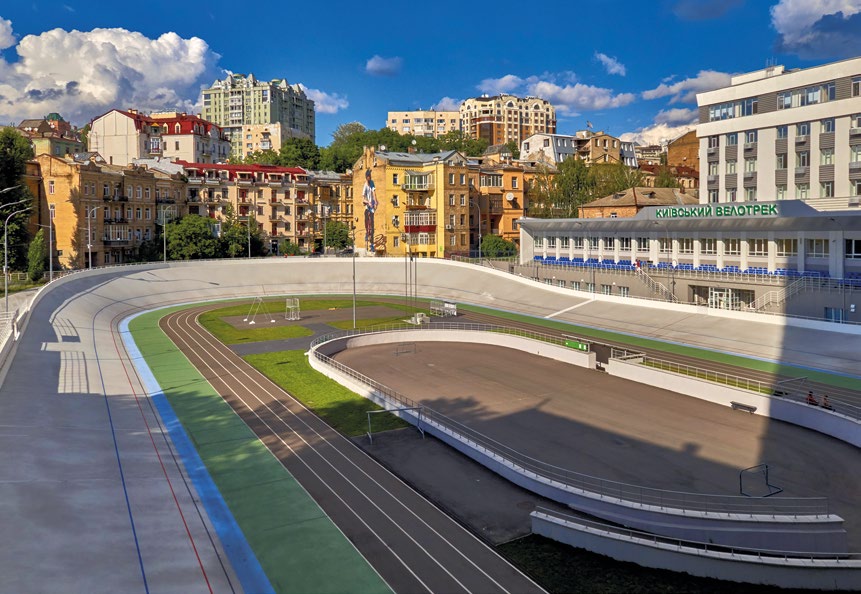 The The Racing Circle had several renovations and rebuilding.

The cycle track had several renovations and rebuilding: in 1939 – first renovation; in 1967 – major reconstruction with complete renewal of concrete surface on the track; in 1987-1989 – second reconstruction, when the concrete-based track was coated with Siberian larch wood; and last renovation of 1991, when the worn wooden surface was replaced. In 1998, the Kyiv cycle track, as one of the oldest in Europe, was recognized as an historical and architectural monument. The future seemed bright but … In August 2007, the cycle track was stripped of its national status, and in 2009 it was partially demolished and built over with high-rise apartment houses. The situation improved in 2014, when the cycle track became partly usable. Two years later, the third major reconstruction with a track extension to 286 meters began and this was completed in the spring of 2017. The ceremonial opening of the renovated cycle track took place on 21 May.