The Passage in Kyiv

Passage is a small, narrow street located in the centre of the Ukrainian capital city of Kiev.

It is the most unusual street in the capital. Should we say house-street, as it is a house that consists of two opposite buildings connected by passageways. Having passed under the arch from bustling Khreshchatyk, you find yourself in an small space with a touch of class. This commercial/residential building with the corridor has always been a special place for VIP guests of the city and for those who live in the capital. Its construction began in 1913; the project of Kyiv architect Pavel Andreev and was half built when World War I began. It remained unfinished until WWII, and then in the autumn of 1941 was bombed flat together with most of the buildings on Khreshchatyk. After war the building was reconstructed. Its exterior was restored according to the original plan. The upper floors were rebuilt as apartments for the elite of the arts. Here lived famous singers, writers, composers, architects, artists, and doctors, and you can see commemorative plaques with many of their names. Now, famous brand boutiques, shops, cafes and pubs are located on the first floor. 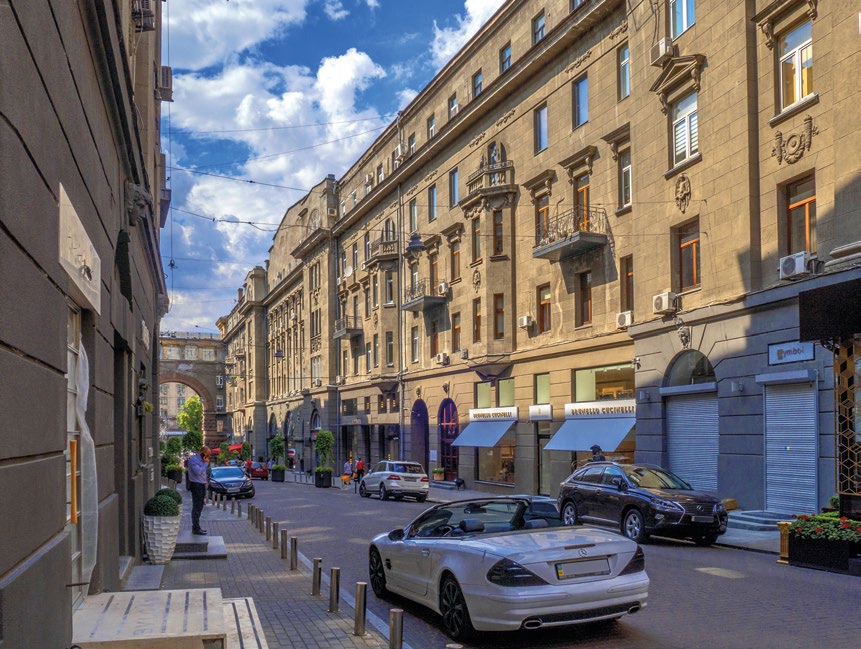 The facade is richly ornamented with interesting decorative elements. For example, a bas relief of children figures: they are not playing with the lion and lioness, they are teaching them to drink! They are opening his mouth; some are bringing a cup of wine; others pouring wine from an amphora. The other children with grapes are making wine, and two of them are tasting it. You can also see garlands, coats of arms, skulls of bulls, angels, owls, wands of mercury, men and women hugging, etc. Passage Street is also famous for its sculptures: “Bench” and “Bicycle” (a chair on the bike), or the monument to famous architect Vladislav Gorodetsky, sitting at a cafe table with a cup of coffee in his hand. This is the same cafe he had visited so often while he was alive. The arch of Kyiv Passage has seen tragic events. It was used as a public gallows during the revolution of 1917 and both world wars. Convicts and criminals were hung from its crossbar. But these events did not taint the Passage – it is too beautiful, too much appreciated by Kyivans and Kyiv’s visitors. In 1990s, a small fountain appeared in front of the arch. Today the Passage is a famous place for shopping and strolling. Also, it is a great place to meet the one you love!