The Motherland Monument in Kyiv

This grand memorial ( Motherland )by the Dnieper River was inaugurated on 9th May 1981. This solemn ceremony was attended by the then General Secretary of the USSR, Leonid Brezhnev. Inside this huge structure is the Ukrainian State Museum of the Great Patriotic War. It is 20 ha and the museum has 18 exhibition rooms. The displays include Fire of Eternal Glory; Alley of the Hero-cities, combat vehicles, and around one hundred bronze figures symbolizing the heroic struggle against the invaders. 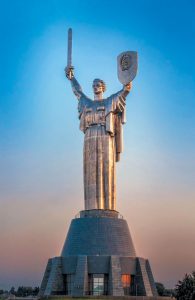 The memorial is crowned by the gigantic Motherland statue with a 16 m long shield that alone weighs 12 tons. A damping device to reduce wind vibration is installed in the highest point of the sword in the statue’s right hand. The diameter of her arms is 6 m! With the pedestal, which houses the museum, the all-welded structure is 102 m high and weighs 450 tons. This is one of the highest statue figures in the world. The memorial was designed by Evgeny Vuchetich and a team of sculpters and architects from Moscow and Kyiv. The principals were: Vasily Borodai, Viktor Yelizarov, Frid Sogoyan, Georgy Kislyi. Despite the many changes that have happened since independence, the museum keeps alive the memory of Ukraine’s contribution to the the victory over fascism. The memorial complex is a favorite tourist spot and a popular day out for Kyiv residents.