The Lavra in Kyiv

The Kyiv Pechersk Lavra, is a spectacular orthodox Christian monastery and cave complex, standing on a hill overlooking the river Dnipro. This is a large complex of golden domed churches and onion shaped towers in a mini city, built on top of a labyrinth of narrow underground caves containing chapels, catacombs, and monastic rooms. This magical and enchanting monastery is the most Holy place in Ukraine and the center of Orthodox Christianity in Eastern Europe. It was founded by reclusive monks Antoniy and Fiodosiy in 1051 as a center from which to spread Christianity throughout the Kyivan Rus. It is recorded that the reclusive Reverend Antony first settled in the Varangian caves and his friends and monks began visiting him, bringing him food and clothes. Followers continued to join the community and eventually there was no other option than to build a church above ground. By the 12th century the Lavra had become the leading religious and cultural focal point in all of Eastern Europe. The caves themselves were still used by the monks as dwellings and a place to worship. They were even buried there, the cool humid atmosphere helping to preserve the bodies and mummify them naturally. In fact this apparent miracle only served to enhance the monastery’s reputation and the monks bodies can still be seen almost perfectly preserved to this day. Since the 13th century, the Lavra has gone through several tragic periods of history: devastating raids of the Pechenegs, Polovtsians, Torques, and the overrunning of Kyiv by hordes of Mongol-Tatars led by Batu Khan when all of its buildings were destroyed, plundered, and burned several times over. Reconstruction began only in the 18th century. 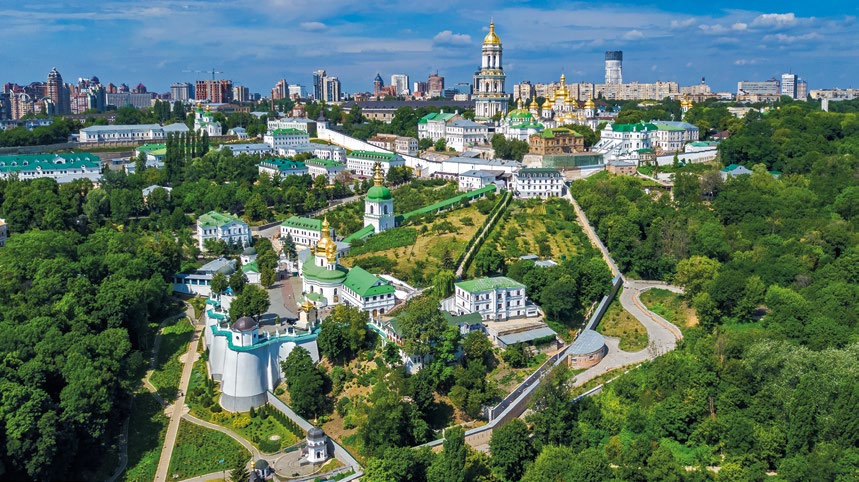 The Cathedral of the Holy Dormition and the Trinity Gate Church were built and decorated in then-popular baroque style. The 96.5-meter high Great Lavra Bell tower also appeared by the monastery at that time. And despite all these terrible historical events, including the bloody years of the 1917 revolution followed by decades of religious persecution and the horrors of WWII, the Lavra has survived and become more and more beautiful. Today, there are two parts. The Upper Lavra, which is a recognized historic and cultural monument (since 1990 it is a UNESCO World Heritage Site) and the Lower Lavra, which is a working monastery. In addition to the beautiful Dormition Cathedral and the Great Lavra Bell there are a number of exhibitions and museums to enjoy: the museum of microminiatures of N. Syadristy, the museum of jewelry, the museum of Ukrainian folk decorative arts, the museum of books and printing, and the museum of theater, music and cinema. Every year, over 45 million visitors from all over the world tour this majestic monastery complex and are amazed by its beauty and splendor.