Kyiv is not just majestic churches, chestnut trees, green hills, and steep slopes, but is also Dungeons. There is a hidden Kyiv beneath your feet – a whole network of tunnels under the city. Down here is the sewage system and rivers and caves hidden in concrete, plus the secret “Stalin Metro” and indeed, the metro itself. The most famous dungeons are the Nearby and Far-off Caves of Kyiv Pechersk Lavra, where 79 tombs of saints and monks still survive. It is believed that these underground catacombs appeared much earlier than the monastery itself which was founded in 1051 under Yaroslav the Wise. According to an alternative story, Lavra’s history began in 1057, when the monk Antony settled in a nearby cave on the hill. His followers came to the Dnieper soon after and enlarged the underground cloister. The total length of the underground corridors is 293 m, containing 49 holy relics. According to legend, the spirits of the saints sometimes wander through the maze of winding corridors. Some remnants of the Tsarist-era underground passages are also preserved in Kyiv. One such passage starts from the Green Theater, and extends to the bank of the Dnieper. 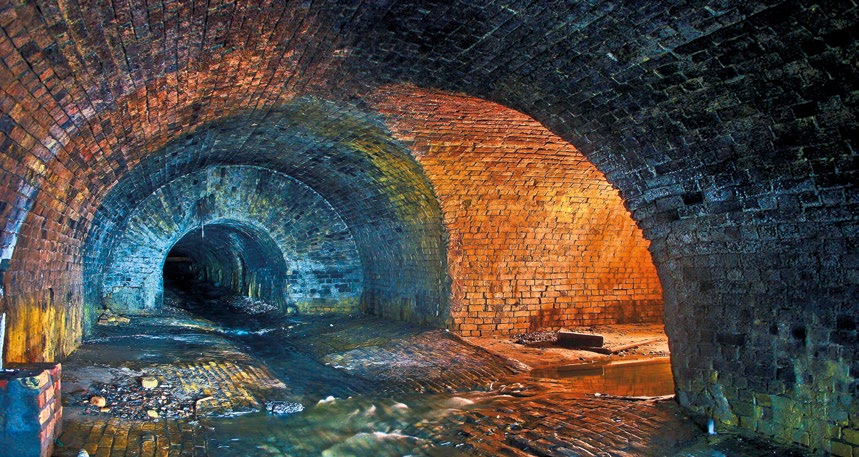 The most famous dungeons are the Nearby and Far-off Caves of Kyiv Pechersk Lavra.

Under the river itself there are supposedly two tunnels: Northern (Obolon’-Vigurovschyna) and Southern (Zhukov Island-Osokorki). Their construction started before the WWII, but after the outbreak of hostilities work was halted. They say, however, that the tunnels were finished in perfect secrecy, and now they are part of Kyiv’s defense system. The most visited underground feature of the capital city is, of course, the Kyiv metro. Still, there are places passengers never see – passageways between stations, reserve lines, secret tunnels, and “ghost stations”. The drainage-tunnel system (DTS), subterranean rivers and streams, and sewer collectors are most favored by explorers. DTS are the pipes laid on the slopes of mountains and hills to drain groundwater. They are a system of vertical wells and horizontal culverts, through which the water flows. Subterranean rivers and streams are very numerous in Kyiv; the oldest ones – Clov, Glybochytsa, Skomorokh, and the most famous river, partially run underground – Lybid’. On Lysa Hora (Bald Mount) there is a mysterious Cave of Five, named so by the number of its exits. Nobody really knows who built it and why; unfortunately, it’s not possible to go to this interesting place without mountaineering equipment! Lysa Hora is known as one of the most mysterious places in Kyiv. Numerous legends and scary stories are told about events, which took place here in different periods of history. Lysa Hora is believed to be a cursed place. Thus, it attracts people interested in occultism, magic and the esoteric. According to city legends, the witches hold their Sabbath here every year at night of 30th April. They fly to Lysa Hora on their magic brooms and gather a special plant – centaury, which grows there, in order to use it for their re-incarnation rituals. The witches dance and tell each other about the evil deeds, which they have carried out during the past year. Those who love mystical stories and have strong nerves are welcome to visit this brooding, enigmatic place, located near Vydubychi metro station in Kyiv.