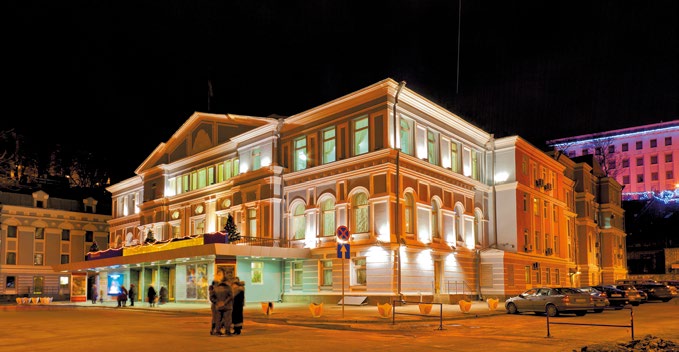 The interesting history of Franko Theater.

Ivan Franko Square is the home of the Drama Theater building and a small public garden with a fountain. The theatre, neo-Greek in style, was designed by architects Edward Ferdinand Bradtman and George Shleifer and opened to the public in 1898. It was known as Solovtsov’s Theater. The intimate 1,200-seat hall was decorated in rococo and baroque styles. Another eminent architect, Vladislav Gorodetsky, contributed to the interior design work. In 1919, the theater and its building were nationalized by the state and the institution became known as the Lenin Second State Theatre of the Ukrainian Soviet Socialist Republic. In 1920-1924, a drama studio was added and run by V. Sladkopevtsev. In due course, it was replaced by the Berezil Theater directed by Les’ Kurbas. In 1926, the acting troupe of Ivan Franko made this theater their home and they have stayed ever since.

During the Nazi occupation of 1941-1943, the building was badly damaged and but then rebuilt in 1946. In 1960, the building largely survived the spate of capital reconstruction but lost many of its original decorative elements. At this time, the third floor was added, the entrance hall widened, and the facade and interiors rearranged. Today’s the theater’s full name is the Ivan Franko National Academic Drama Theatre.
The square in front of the theater features two touching monuments to outstanding Ukrainian actors Gnat Yura and Nikolai Yakovchenko. Yura is depicted as brave soldier Svejk and Yakovchenko as an old man wearing a beret sitting on a bench with his beloved dog Fan Fang, just as he liked to do during his life.