“Wonderous is the Dnipro in calm weather, when freely and smoothly he course, wonderful summer holidays along its picturesque banks. V. N. races his full waters through forests and hills. No rippling, no roaring. You look and do not know if his majestic breadth is moving or not, and you fancy he is all molded of glass, as if a blue mirror roadway, of boundless width, of endless length, hovers and meanders over the green world.”
Excerpt from “The Terrible Vengeance,” by Nikolai Gogol (translated by Richard Pevear and Larissa Volokhonsky)
The Dnipro is the main river in Ukraine, and it is the fourth longest in Europe. It starts as a stream in a swampy area not far from Smolensk, Russia. But near Kyiv, after the Pripyat and Desna Rivers flow into it, it becomes truly a mighty river: up to 700 m (2,300 ft) wide and up to 8 m (26 ft) deep. The Dnipro is 2,200 km (1,367 mi) long. Half of it runs through Ukraine, and the other half through Russia and Belarus. But we think of it as a Ukrainian river.
After the cascade of five hydroelectric plants and passing through big industrial cities like Kremenchuk (pop. 232,000), Kamianske (pop. 274,000), Dnipro (formerly Dnipropetrovsk; pop. more than 1,000,000), Zaporizhzhia (pop. 786,000), and Kherson (pop. 312,000), the Dnipro flows into the Black Sea, forming a delta up to 17 km (10.5 mi) wide. There are several hypotheses about the origin of the name “Dnipro.” Here are two of them: it comes from the Scythian Dānu (river) and apr (deep); or from the Sarmatian Dānu apara (the river on the far side).

In ancient times, the Dnipro was an important trade route. 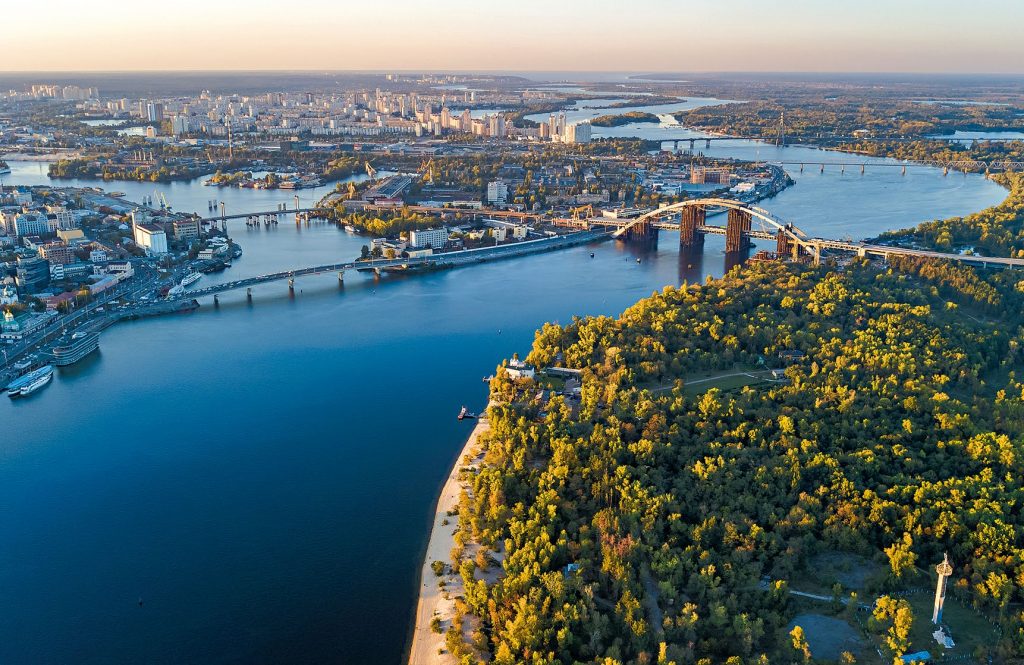 It’s local name in the times of Kyivan Rus’ was Slavutych. In Ancient Greece it was called Borysthenes, which we know from Herodotus’ writings (5th century BCE).
In ancient times, the Dnipro was evidently an important trade route, which 12th century Russian chroniclers called “from the Vikings to the Greeks.” Clearly it was not easy to travel from the Baltic to the Black Sea coast, and it wasn’t safe either. In two places, the water route was blocked and heavily loaded ships were dragged over the ground for several kilometers.
Goods brought from the north were usually iron, ambergris, walrus bone, items made of whale leather (ropes, etc.), Baltic amber, weapons, Novgorod furs, honey, plunder stolen by Vikings in western Europe, and slaves – Slavic women and children who were caught “along the way.” And goods traded up the river, in return, included wines, spices, jewelry, glassware, expensive fabrics, icons, and books. Today, the Dnipro provides electricity, transportation, fishing, and, of “Wonderous is the Dnieper in calm weather, when freely and smoothly he course, wonderful summer holidays along its picturesque banks.