Saints Cyril Church and Athanasius of Alexandria Church is a remarkable survivor of ancient history. In its time, the church suffered much and was repeatedly at risk of destruction but it has survived. The church was founded in a once distant suburb – Dorogozhychi, in the dynasty of Chernigov princes Olgoviches. In 1139, while fighting for the throne of Kyiv, Prince Vsevolod Olgovich stormed and captured the city from this direction. And here he decided to lay the foundations of the temple-residence and the temple-tomb of the dynasty. The church was rebuilt anew several times, and it is preserved as an example of the “Ukrainian baroque” style, but the clear influence of the ancient architects of Chernigov can be easily seen in its design. 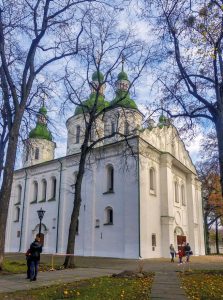 The interesting history of Cyril Church.

In the 19th century, during renovation work, restorers uncovered the ancient frescoes, some of which you can see today. The wall of icons is magnificent: it comprises four icons painted by brilliant Mikhail Vrubel – St. Athanasius, Virgin Mary, Christ, and St. Cyril. Some wall paintings in the choir gallery are also by him. In 1929, St. Cyril Church was closed for services and it became part of an historical and cultural reserve. During the Nazi occupation services were resumed, but after the liberation of Kyiv the church was turned into a museum. The great acoustics makes the performance of hymns and prayers memorable events. Presently, the church is open for services for Christians on certain weekdays.