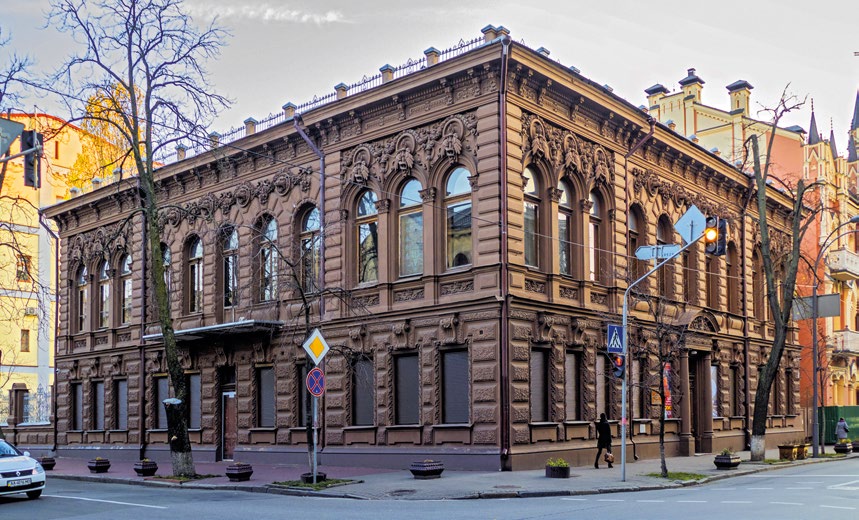 Chocolate House has nothing to do with chocolate.

The house No. 17/2 located on Shovkovychna Street is the former mansion of the famous merchant and philanthropist Semen Mogilevtsev. With his money, 200 exhibits for the Art Museum were bought, and the cross held in the hands of the St. Vladimir Monument was equipped with electric lighting. Also, the current Teacher’s House was built. The Chocolate House, a copy of a Renaissance palace was built in 1901 close to two other iconic houses – the Castle of Sighs and the Gothic Castle of Baron Ikskyul-Gildenband. The interiors are in different architectural styles: there is a Moorish hall, a Renaissance dining room, a modernist boudoir with two stained-glass windows, and a study with carved furniture in neo-Byzantine style. On the ceiling of the last hall is a portrait of Sarah Bernhardt in the role of the Dream Princess, an interpretation of the famous poster by Alfons Mucha. The study ceiling was originally decorated with paintings by Svetoslavtsev, but these are currently in storage at the National Art Museum. Semen Mogilevtsev died shortly before the revolution and did not live to see how his mansion was appropriated and reconstructed by the state. When the marriage ceremony was once again permitted in the USSR, the house became the civil registry from the early 1960s to 1986.
Most Kyivans remember the Chocolate House as the place where they or their friends made their vows. And the newlywed tradition is that to have a long and happy marriage, you must look into the mirror in the white (Renaissance) hall. Although marriage ceremonies are no longer held here, the mirror still has its mystical power of happiness. This house has been renovated and preserved virtually in its original form with its original furniture and other items returned. You can hire the house for parties, events, and literary or musical evenings. V. U.