The history of Stepan Bandera.

Stepan Bandera (1909-1959) was born in Uhryniv, which was part of Galicia under the rule of the Austro-Hungarian Empire before the First World War, and after the war (and a very short period of Ukrainian independence), it belonged to Poland. Like his father, he was an ardent supporter of Ukrainian independence, but at the same time, he held radical views. From 1929, he was a member of the Organization of Ukrainian Nationalists (OUN); after becoming one of its leaders, he initiated protest actions against the Soviet government and famine in Ukraine, as well as terrorist attacks and political assassinations. He was arrested for participating in the murder of the Polish leader Pieracki, and became known for the Warsaw process, which was widely reported by the European press. He was sentenced to death, but the verdict was commuted to life imprisonment. 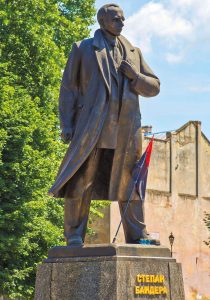 Bandera escaped from prison when Nazi troops entered Poland. After the division of Poland and Western Ukraine went to the Soviet Union, he was in exile for several years in Germany, Austria, and Slovakia, but did not lose connection with the underground and the OUN, and he participated in the preparation of an armed uprising against the USSR. In 1941, he was arrested by the German authorities for attempting to proclaim an independent Ukrainian state, and until 1944 he was in the Sachsenhausen concentration camp.
In the last years of his life, Bandera had significant differences with other OUN leaders, and he collaborated with American and European intelligence services. The Soviet side made repeated attempts to kidnap and assassinate him. In 1959, in Munich, he was killed by KGB agent Bohdan Stashynsky, who confessed to at trial.
The name of Stepan Bandera has become a household name for radical Ukrainian nationalists.