Oleg Antonov State Aviation Museum, or Aviation Museum, is the largest museum displaying the country’s technical history. The museum is located on the former Training Air Base of KIIGA (now National Aviation University, NAU), and the aircraft then assigned to the base became the core of the collection. It is close to Igor Sikorsky Kyiv International Airport (formerly Zhulyany Airport) at Medova St, 1. You can get there from Demiivska metro station by taxi-bus No. 220. The museum opened its door to the public on 30 September 2003, marking an important date – the 100th anniversary of world aviation and the 80th anniversary of national aviation in Ukraine. 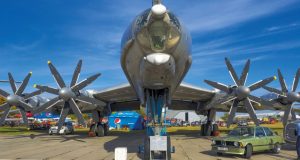 Today, it is the place where you can meet future pilots and technicians examining and studying the flying machines. In the beginning there were only 30 exhibits on a 20-ha area, but now they are almost 70. Helicopters, missile carriers, fighters, trainers and passenger aircraft. There are also weapons here – various missile and bomb launchers for aircraft and helicopters. Pilotless aerial vehicles (PAV) for operational and tactical intelligence and launcher units are also in the collection. The Museum plans an expansion for at least another 10 exhibits. You may touch and examine, climb into the pilot’s seat, listen to factual recordings, and finally buy a special souvenir in the shop.