One of the oldest and most revered trees of the city has significant surroundings – it grows on StaroKyivska mountain, a few steps from the basement of the Tithe Church and not far from St. Andrew’s Church. For several decades now, there has been controversy as to its real age: some experts, both dendrologists and historians, are inclined to think that Metropolitan Peter Mogila; the prince of Moldova; the son of the Hungarian Queen; a great warrior and the founder of Kyiv-Mohyla Academy planted it in 1635. His efforts restored the Church of the Tithes – the first stone church in Kyiv Rus, built by Prince Vladimir in the 10th century and destroyed by the hordes of Batu during the capture of Kyiv in 1242. 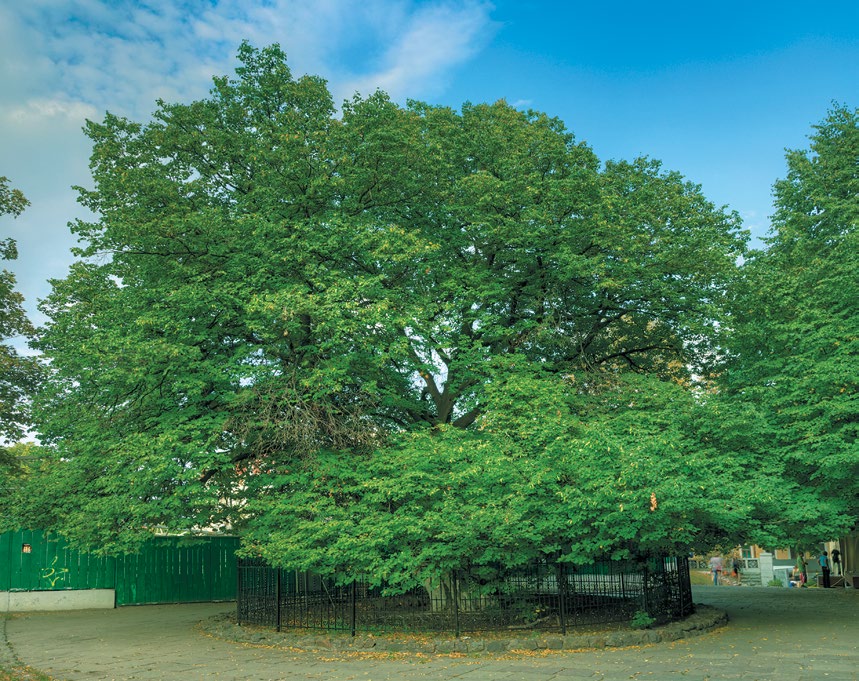 Other researchers claim that the tree is much older and witnessed the invasion of the Mongol-Tatars. Somehow, it miraculously survived those terrible days. Their additional argument is a linden growing at the Far Caves of the Kyiv Pechersk Lavra, which, according to legend, was planted by Theodosius of Pechersk at the beginning of the 12th century. It is curious that over the past one and a half to two centuries it has not changed in size – and in the old engraving, which depicts the restored temple of the Virgin (Tithe), it looks the same as today. However, while some are tempted to believe the supporters of the second version, the first one is much more likely. The Linden is at least 383 years old, and has seen many dramatic and heroic events in Kyiv history and the rise and fall of many historical figures. The legendary tree is shrouded in many other mystical secrets and superstitions. Kyivans believe that if you make a wish and tie a ribbon to a branch, it will surely come true. However, that is now strictly forbidden. First of all, the rotten hollow in the trunk was sealed, then it was surrounded by a fence and the hanging of decorative objects was forbidden. You can still walk around it clockwise seven times and make a wish. But keep your distance! The StaroKyivska Linden will help those who are in love, in a quarrel or separation, and those who are searching for their betrothed. It brings good luck to all.