The cathedral was founded by Grand Prince Yaroslav the Wise and built between 1037 and 1044 on the site of a victorious battle where Kyivans defeated the Pechenegs (Asian nomadic tribes). Its name comes from the 6th-century Hagia Sophia cathedral in Constantinople. After the pillaging of Kyiv by Andriy Bogolyubskyi in 1169, followed by Mongolian Tatars in 1240, the cathedral fell into disrepair. It was also greatly damaged in the 16th century, when Poland and Ukraine were trying to unite Catholic and Orthodox churches. In 1633, Orthodox leader Peter Mohyla commissioned repair work and the upper part of the building was completely rebuilt in distinctive Ukrainian Baroque style, while preserving the splendid Byzantine interior. The collection of 11th century mosaics and frescoes is unique and complete. The best known is the 6 m (20 ft) tall mosaic of the praying Virgin Orans, made of 177 colours of glass and stone tiles. The other masterpieces include the Pantocrator, the Communion of Apostles, the Deisis and the Annunciation. 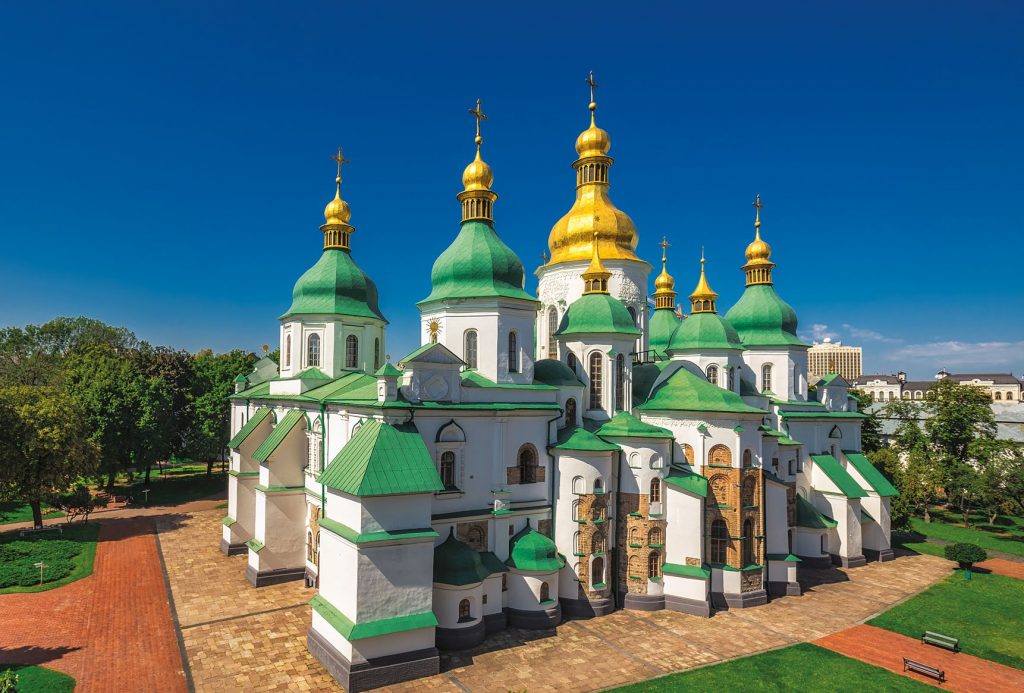 Some frescos are especially interesting from both historical and artistic points of view, and show not only scenes from the Holy Bible, but also secular subjects. For example, in the cathedral one can see portraits of the Yaroslav family members. The belfry is decorated with paintings of the 11th century depicting scenes of the games arranged in Constantinople by Emperor Constantine in honor of Princess Olga. In addition to numerous images of heavenly Powers and the pantheon of Christian saints, many scenes from Byzantine court life are preserved on the walls and pillars of the cathedral. These are known as the Sophia graffiti featuring grandees, equestrian competitions, hunting, and musicians. These 7,000 examples of graffiti are of great historical value. One of the most famous from the 11th century is the signature of Anna Yaroslavna, the future Queen of France. St. Sophia Cathedral was the first Ukrainian landmark included onto the UNESCO World Heritage List. The architectural complex includes the 76-m-tall (249 ft) azure and white bell tower, Metropolitan house, the refectory, the Zabrovsky gate, the south entrance tower, the caves of cathedral elders, and the seminary encircled by a stone wall. The underground caves of Sophia are fascinating. Despite many searches since 1916, no one has been able to find them. Legend has it that they may contain the lost Library of Yaroslav the Wise, a legendary collection of books, documents, and various – even mystical – artifacts. Visitors to St. Sophia Cathedral should note the angels in Cossack trousers on the courtyard facade of the bell tower. They hover over the entrance, welcoming the incoming and blessing the departing.