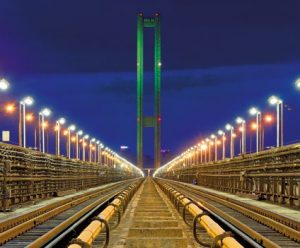 This impressive construction is one of the newest bridges in Kyiv. Building began in 1983 to solve an urban traffic problem. The Kharkiv residential development was growing ever larger and road connections from the city to Boryspil International Airport also left much to be desired. The construction of the Syretsko-Pechersk metro extension was carried out at the same time and the tracks were laid alongside the highway and over the bridge. Alexey Gavrilov was the chief architect of the project. Although the Ukrainian Soviet government turned down many interesting architectural solutions as being too expensive, the bridge they did build is a handsome edifice. Initially an elevator was planned to allow access to an observation tower at the top but again, costs did not permit. At the time of its opening, this bridge was state of the art in the USSR; and Vladimir Scherbitsky, the First Secretary of the Central Committee of the Ukrainian Communist party, called this project the “Pride of Ukraine”. The technical calculations were handled by engineer Georgy Fux, the brains behind many bridges in Ukraine. 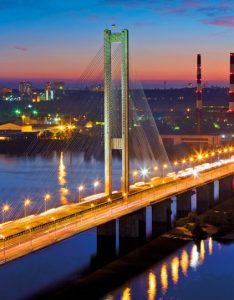 The bridge was opened to road traffic on 30 December 1990, and two years later, the metro cars began running across on the lower deck. The Southern Bridge is 1,256 m long and 41 m wide. The height of the supporting pylons – 120 m. The bridge cost 112 million Soviet rubles. It became a major transport artery of the capital of Ukraine, with a total length of over three kilometers. The authors of this project were awarded with the USSR State Prize.