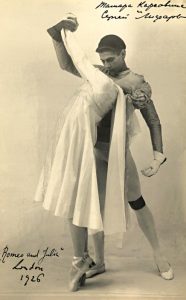 Born in Kyiv in 1905, Serge Lifar discovered ballet in 1920 when he wandered into the studio of Bronislava Nijinska, the choreographer and ballet mistress at the Kyiv Opera. He studied with her until leaving for Paris in 1923. He joined les Ballets Russes in 1923 and soon became a favorite of Serge Diaghilev. Lifar performed with Serge Diaghilev’s troupe from 1923 through 1929, when the company disbanded. However, the greater part of Lifar’s career (from 1929 to 1945 and from 1947 to 1958) was at the Paris Opera where he was invited as a dancer and ballet master and eventually became director. His greatest achievements as a dancer in Diaghilev’s troupe were in Balanchine’s Apollo and The Prodigal Son. He also performed in Giselle, L’Apres-midi d’un faune, and Gaite Parisienne, but it was the ballet Icarus (1935) that really made his reputation as a choreographer, along with many other memorable works, including Suite en Blanc (1943). 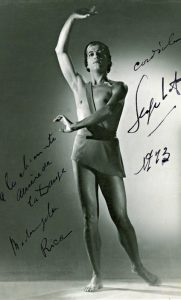 Accused of collaboration during World War II, Serge Lifar left Paris in 1945 to form the Nouveau Ballet de Monte Carlo. During the war years, Lifar was often photographed with German officers. Although he was cleared of the collaboration charges, for a time his performances were boycotted. On 5 December 1956, he made his farewell to the national ballet scene by dancing Giselle with Yvette Chauviré. After that he choreographed or staged ballets for various European companies. In addition to his seemingly inexhaustible energy for dance projects, Serge Lifar founded the University of the Dance and became a professor who wrote over 25 theory of dance books. He was an avid collector of paintings and books. He acquired a priceless archive of Diaghilev, which he added to all his life but was forced to sell part of this collection in his old age. In 1961, he was able to enjoy a reunion with his homeland: he revisited Kyiv, the city of his birth, which he had left 40 years before. After his death, 8,177 unique books and documents were donated to Ukraine by Countess Lilian Alefeld. The collection is stored in Kyiv, in the art literature section at Lesia Ukrainka public library.