The history of Saint Vladimir’s Cathedral.

Saint Vladimir’s Cathedral was constructed to commemorate the 900th anniversary of Christianity in Kyivan Rus and the baptism of Vladimir the Great. The original design of architect Ivan Storm was approved personally by Emperor Nikolay I in 1852, but its construction was commissioned by the next emperor, Alexander II, in 1862. In the same year the stone foundation was laid, yet it was another 20 years before its completion. The cathedral was built on donations and so the project was postponed on multiple occasions for the lack of funds. When it was almost finished, cracks on its walls and ceilings appeared because of errors in design. It took another decade to cure the problem. The cathedral was built in a new Byzantine style and represents a traditional hexastyle temple crowned by seven cupolas. Famous art historian Adrian Prahov was in charge of its decorative appearance and this work took over 11 years. Elements of the interior and mosaic floor were made of multicolored marble imported from Spain, France and Italy. Gray Carrara marble was used to make its astonishing iconostasis. Its eye-filling mosaics lining the interior were created by masters from Venice. 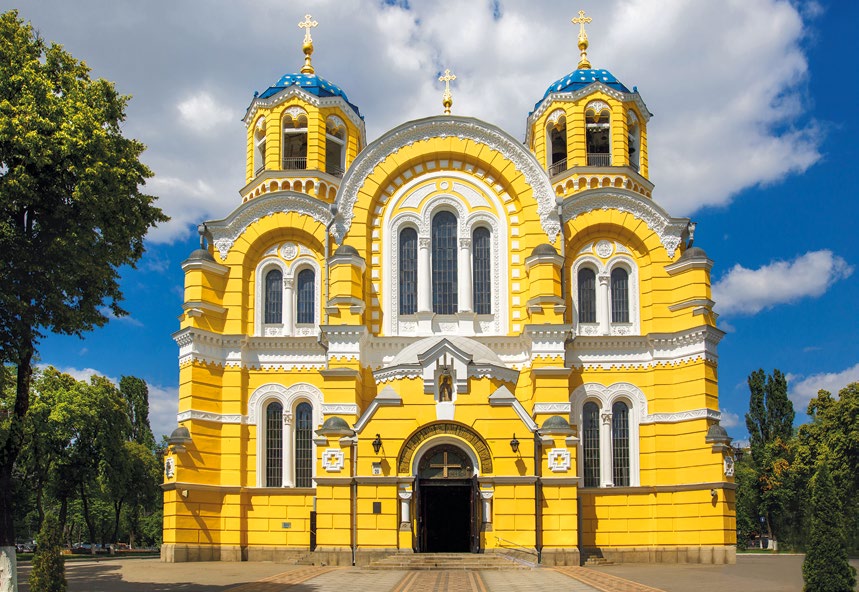 The gallery of Cathedral frescos was made by 96 painters! Most of the wonderful frescos were created by outstanding painter Viktor Vasnetsov. Altogether he created 15 thematic compositions and 30 separate figures of a total area of about 3,000 m2. His most famous works are “God’s Mother with a Child” on the eastern altar wall (it alone took 2 years of his painstaking daily work), “Saints” and “Prophets” on its northern and southern walls as well as “Jesus Christ” in the main cupola. On both sides of the entrance to the Cathedral you may also admire his “Baptizing Vladimir” and “Baptizing Kyivans”. Several compositions (“Christmas”, “Resurrection”, “Epiphany”) as well as numerous icons of the iconostasis were made by famous painter M. Nesterov. The purely ornamental murals performed by another famous painter M. Vrubel make the heart soar. In the summer of 1896, in the presence of the last Russian emperor Nikolay II and his wife, the cathedral was holily consecrated. Surprisingly, the sad fate of most of the old Kyiv churches passed Saint Vladimir’s Cathedral. Though the dome was removed in 1929 and in 1934 they intended to dismantle the rest but never did; and ironically, in 1941 the Cathedral was rescued from explosion by German sappers and even restored during the occupation. Nowadays, Saint Vladimir’s Cathedral is rightly considered one of major landmarks in Kyiv.