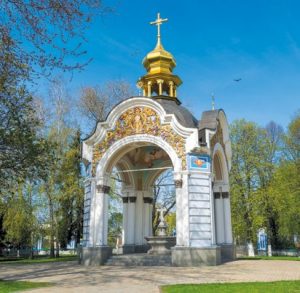 The buildings of the golden domed Saint Michael’s monastery, are one of the architectural jewels of ancient Kyiv. They are also the Christian religious center of Ukraine. The main building, Saint Michael’s Cathedral, is the guardian of Kyiv and was consecrated in the name of Archangel Michael, the patron saint and protector of the Ukrainian capital city. The cathedral stands on the Old Kyiv hills dominating its surroundings yet still in perfect harmony with the trees and neighboring buildings built in different eras. The fate of Saint Michael’s Golden-domed monastery is very sad. Founded in 1108 by the Kyiv prince Svyatopolk Izyaslavovich, it became a resting place for many princes and metropolitan citizens. But in 1240 the hordes of Batu destroyed the monastery, but due to the efforts of the medieval Orthodox authorities it was restored, and its features, were rebuilt in the “Ukrainian baroque” style, largely during the 18th century. In addition to the restored cathedral, there arose a majestic bell tower, a refectory, and a strong fortress wall surrounding the entire monastery area. 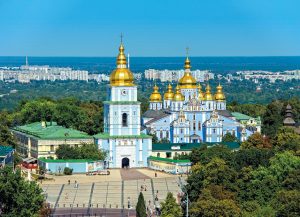 Judging the number of those who wish to visit the monastery and pray within its walls, it was a worthy rival to Kyiv Pechersk Lavra. But then the death sentence was passed upon the monastery by the Soviet Union. In the 1930s, Saint Michael’s Cathedral was blown up and the majestic bell tower along with a part of the monastery wall were destroyed. For decades, only the foundations of Ukraine’s most ancient church remained. But today, the church, the bell tower and other monastery buildings have been restored. Since 2000, the liturgy is administered here. The modern monastery complex attracts both believers and tourists, and mirrors the neighboring architectural complex of St. Sophia Cathedral.