Saint Andrew’s Church was built in honor of Saint Andrew who is recognized as the “Apostle of Rus”. According to the chronicle “The Tale of Bygone Years”, Saint Andrew came to banks of the Knieper in the 1st century AD and erected a cross – and this is where the church now stands. He prophesied that the sparsely inhabited area would one day become a great city. And just he predicted, the great city of Kyiv arose to become the center of the Eastern Orthodox faith. Saint Andrew’s came into being when Empress Elizabeth decided she needed a summer residence in Kyiv; a palace and a church. During the official ceremony on September 9, 1744, the Empress personally laid the first three foundation stones which were stamped with the gold monogram “E I” under the royal crown. Secular gossip had it that the Empress planned to get married to Ukrainian singer and songwriter Alyosha Rozum (later Count Razumovsky), whom she brought to the imperial court in 1732 as her favorite and where she granted him his noble title. After her death, Razumovsky destroyed all documents about his marriage to Elizabeth and gave up his noble title. So were they married or not? This question of Razumovsky, Elizabeth and her children has never been resolved. Princess Elizabeth Tarakanova made a career out of pretending to be their daughter. 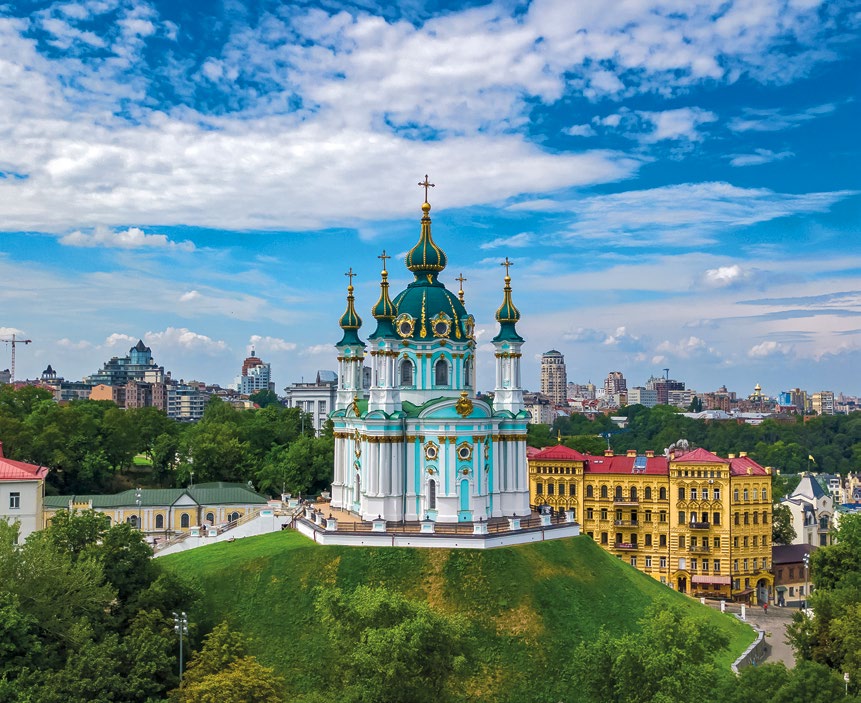 Her story served as a plot for many novels, paintings and films. Finally, she was imprisoned and either died from tuberculosis, or drowned during the floods of 1777. Perched at the top of Andrew’s descent, this colorful Baroque church is one of the city’s best known landmarks. The elegant silhouette of its large dome and five smaller cupolas are easily visible from Podil and beyond. It was designed by imperial court architect Bartolomeo Rastrelli (whose other works include the Winter Palace in St. Petersburg and the Mariinsky Palace in Kyiv), but was built by Kyiv architect Ivan Michurin. Perfection in line and proportions; harmony of forms and the surrounding landscape have attracted worldwide recognition and fame, as well as UNESCO world heritage status.