Rusanivka is one of the first residential areas in the world, completely built on alluvial soils. To get there is very simple – you can just walk from Livoberezhna metro station. The main attraction here is the southern part of an artificial canal (2,700 m long, 3-4 m deep and 40 m wide). There are 15 illuminated water fountains, which put on a spectacular show at dusk. Three road and two pedestrian bridges cross over the canal. Previously, on the site of this residential area, there was Rusanivka tract, land owned by Kyiv monasteries. The tract supposedly gets its name from Savva Rusanovich, who owned neighboring lands in the 16th century. 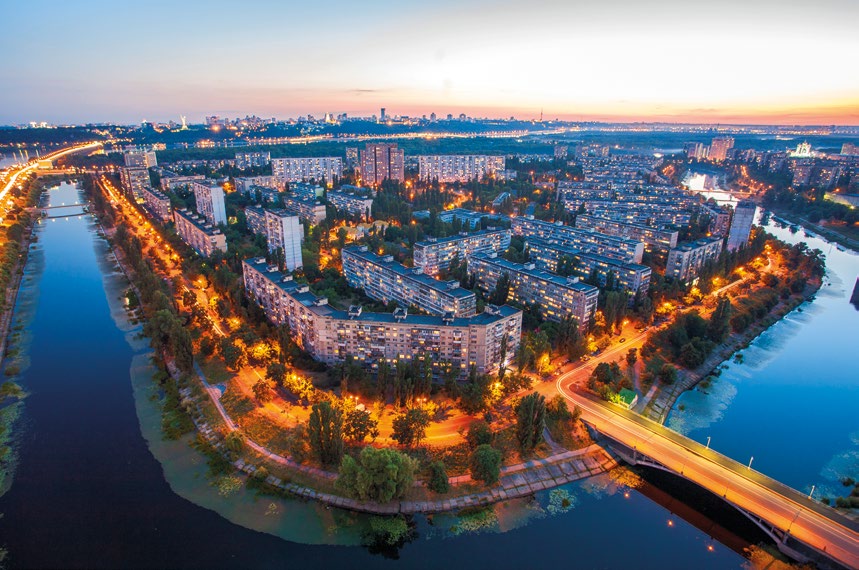 Later, appeared the village of Rusaniv, and the lake nearby was named Rusanivske. The first bridge over the Rusanivskyi valley was built in 1906, with petrol tram tracks laid to the city of Brovary in 1912. During WWII the bridge was bombed, and it was not until 1965 that it was replaced by a new reinforced-concrete bridge for the metro and cars. Rusanivka is considered one of the best residential areas in Kyiv due to the developed infrastructure, convenient location and proximity of the Dnieper and its embankment. The canal is quiet and shady and you can meet river dwellers here like ducks and seagulls. Enjoy a spot of fishing if you wish. It was in Rusanivka that the world-famous actress Mila Jovovich lived when she was a child.