The interesting history of Roksolana.

Roksolana, or Hurrem Sultan (1505–1558), was a Ukrainian, a former slave, who managed to reach incredible heights in the Turkish court. Being the Sultan’s minion, she had the right to give birth to only one son for her master, after which she was obliged to retire from the court and focus on raising her child. But Hurrem gave Suleiman the Magnificent six children, and became his official spouse. Even a special title was created for her, Haseki, which came with a commensurate stipend and position.
Hurrem did not limit herself to raising children; she obtained permission to build charitable and religious buildings in Istanbul and other cities of the empire, then created a foundation in her name and built many mosques, a madrasa, and the Aksaray district – a kind of shelter for women. She built canteens for the poor, homeless, and pilgrims, including the canteen in Mecca. Haseki Sultan had considerable influence on her husband: while on campaigns, Suleiman learned about the empire’s matters only from her letters. And the Sultan’s surviving letters to Roksolana are filled with love and tenderness. 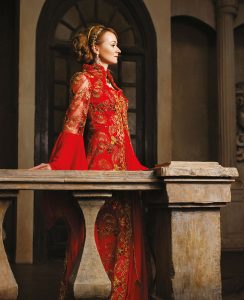 He grieved immensely over her death (historians still argue whether she was sick or poisoned). A domed mausoleum was erected in her honor, the walls of which were decorated with poems and images of the Garden of Eden. This magnificent tomb still stands on one of the hills of Istanbul. Roksolana’s real name is unknown, and the name Anastasia Lisowska, a priest’s daughter from the village of Rohatyn, which is included in all artistic sources, is just a later invention, which in time gained practically “official” status. The nickname Roksolana was given to her by the ambassador of the Holy Roman Empire, and it comes from an old name from the western Ukrainian lands – Roksolania. The legend of Roksolana survived for many centuries after Hurrem Haseki Sultan herself, and is not likely to die soon: there are many books and films about her.