River Port and Quay in Kyiv. One of the main attractions of the Ukrainian capital is the Dnieper River and the city sits on both banks. In Soviet days, departmental recreation centers and camping-type sanatoriums, formerly just called “houses”, were built along the river giving parts of the city a resort atmosphere. Many generations of citizens from virtually all of the Soviet Union came to relax there, often traveling on the small ships that shuttle up and down the Dnieper. The second Dnieper attraction was boat sightseeing tours: short (2-3 hours) and long (from Kyiv to Kaniv, Zaporizhia and all the way to the Black Sea). Boating is very popular with Kyivans: they like to celebrate wedding, anniversaries, graduations, birthdays and other festive events on the water. The river passenger terminal in Podil district has been operating for many decades. In the 1930s, the Ukrainian SSR government decided to build the biggest river passenger transport complex in the USSR. But World War II halted progress. It was only in 1961, that the modern river port was inaugurated. It was designed by Ukrainian architects Vadim Gopkalo, Vadim Ladnyi and Grigoriy Slutskyi. It was pragmatic and practical but still aesthetically pleasing in design resembling a cruise ship in outline. Radio and tele-communications, alarm systems and equipment to monitor river traffic were installed in the captain’s bridge in a round turret atop a tall mast. Various administrative and maintenance units were located in other parts. The project authors accommodated everything, including, the ability to handle many passengers, so the river port became one of the largest in the country. For passenger convenience, the riverside complex had large waiting rooms, a ticket hall, an hotel, a restaurant, a post office, and left luggage lockers.

It was only in 1961, that the modern river port was inaugurated. 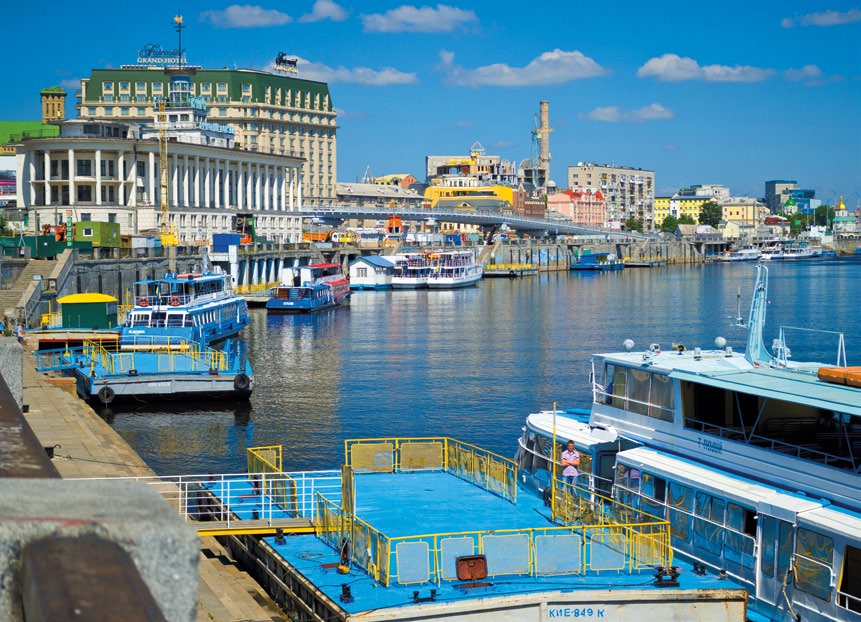 Architecturally, it matched the Poshtova (Postal) Square buildings. From the quayside, it has four stories but on the Square side, just two. Much attention was also paid to the appearance of the surrounding area. The embankment and many piers were renovated. In its heyday this transport complex served thousands of passengers every week. But times change, river passengers diminished and now the river port building is in process of being transformed into a new riverside hotel.