Railroad in Ukraine. Ukraine is a large country, and if you need to get from one city to another on the other side of the country, there’s no better way than by train (because of road conditions and length of the trip, a bus might not be as comfortable; and there are few internal air connections). There are several types of railway cars: an open compartment with sleeping bunks along the sides (platzcart); cabins with four beds (coupé); and a sleeping car (SV), a comfortable two-bed cabin. It’s better to buy tickets in advance, a few days or even weeks ahead of time, because it could happen that there won’t be any tickets available to your destination on a specific date. It is most difficult to buy SV tickets.
The service level is, for the most part, still about the same as it was a half-century ago, during the Soviet Union: not always clean and train cars rattle (neither rails nor most train cars are new, and are, to some extent, worn out). As for extra services, tea is offered in a traditional glass with a metal cup-holder and a bag of cookies or crackers. Nevertheless, a train trip might be a nice way to pass the time by having long conversations or reading a book.
Those who indulge in alcohol on a long trip might invite a fellow traveler to drink “to making new acquaintances” and fortuitous travel companions. 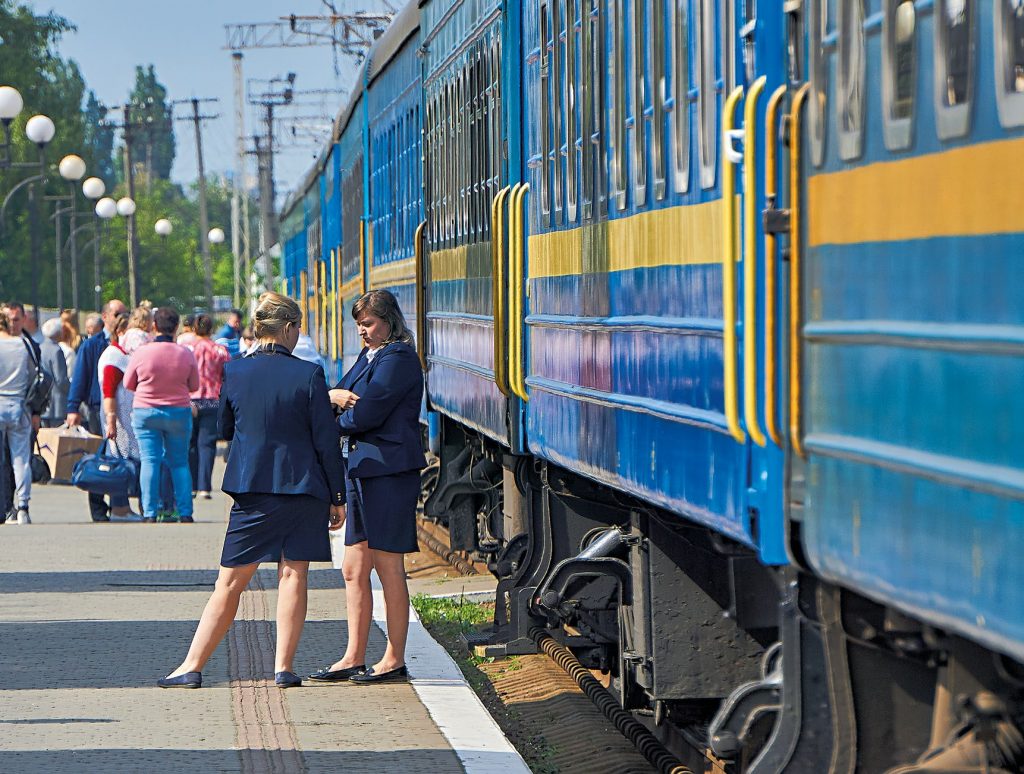 Trains usually depart in the evening and arrive in the morning, so you need to think ahead of time about food (many prefer not to use the dining car, if there is one), a change of clothes, and all the rest, because a cross-country trip can take 10-14 hours.
All rail transportation in Ukraine is managed by the state railway company called Ukrzaliznytsia. It is one of the greatest legacies of the Soviet Union (which, in its time, inherited the legacy from Imperial Russia). As of 2016, the company has: 120 railway stations; 1,614 train stops; 22,300 km (13,850 mi) of rail track; 2,500 diesel locomotives; 1,500 electric locomotives; and about 270,000 employees.
The first railways in Ukraine were built in the second half of the 19th century. In 1861, the first trains started running between Lviv and Peremyshl (a Polish city on the border with Ukraine). By the end of the 1860s, there was a rail line connecting Odesa to Kyiv and Moscow.