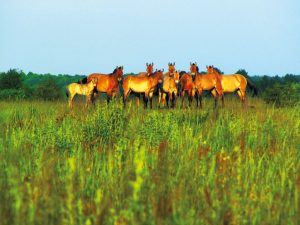 Russian traveler Nikolai Przhevalsky described a new breed of wild horses that he encountered in Mongolia in 1879. Since the 1970s, it has been considered extinct in the wild. They became nearly extinct due to direct pursuit by humans, destruction of natural habitats, and competition with domestic animals. At the beginning of the 20th century, about 50 Przewalski’s horses were brought from Asia to Europe. They became the founders of several lines that ensure the preservation of the species in captivity. But this did not solve the problem of its longterm survival. Lack of natural selection and a full-fledged natural environment would sooner or later lead to extinction, therefore re-naturalization is necessary, a return to nature. 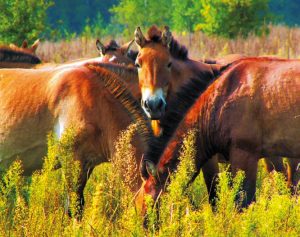 Initially, the horses were kept in an acclimatization center near Chernobyl.

Ukrainian scientists were already discussing the possibility of enriching the fauna of the Exclusion Zone with large hoofed animals just 5 years after the accident. In 1998, 22 animals were brought here from the Askania-Nova nature reserve as part of the “Fauna” program. Initially, the horses were kept in an acclimatization center near Chernobyl; a year later, they were released into the wild. Later, several more groups were delivered. In 1999, there were two herds in the vicinity of the villages Cherevach and Korohod. In 2002, were 38 animals; in 2004, 60. It is difficult to cite the exact number of horses in the Exclusion Zone now, since they have settled throughout the territory, with the exception of the left bank of the river Pripyat.