Graffiti appeared in Pripyat in 2006. Wall “murals” were the result of foreign street artists who came to the Chernobyl Zone specifically for this purpose. While some of them distracted the guide, others dispersed to pre-selected places in Pripyat. More than three dozen graffiti pieces livened up the deserted urban landscape. 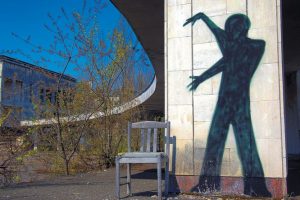 Of course, there was controversy about the appropriateness of graffiti in this city. Many emphatically called for their removal, and some activists tried to wash away the pictures. But the effort to remove the graffiti did not receive much support, and, over time, everyone acknowledged that they quite harmoniously fit into the urban surroundings. In addition, the paint faded, was washed away by rains, and blanched in the sun. Perhaps soon, people will start talking about restoring them. After all, today it is difficult to imagine Pripyat without the pictures of a little girl in pigtails stretching to reach an elevator button in an abandoned high-rise building on Lazarev Street, or children playing in the “Energetic” recreation center next to the words “The dead do not cry”, or a teenager running along a fire escape. 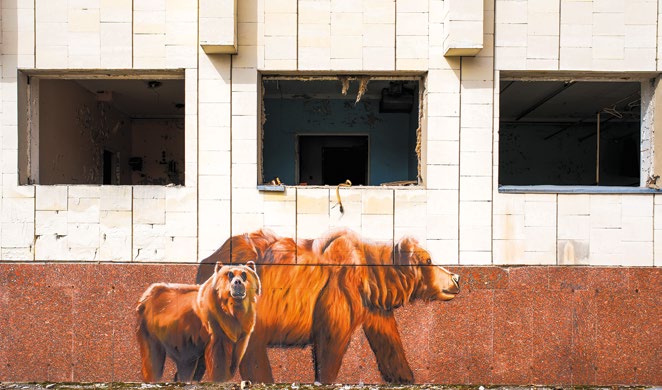 These images did not just become recognizable, they are now full-fledged citizens, the only permanent residents of the abandoned city.
Undoubtedly, these silhouettes are inspired by the famous black shadows left on the walls of houses after the atomic bombing of Hiroshima and Nagasaki. The artists’ idea is simple and sad: the city, which became its own shadow after the catastrophe, is inhabited by the shadows of its inhabitants and memories.