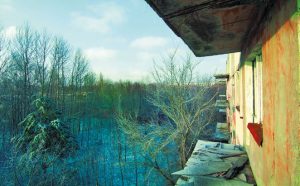 Poliske is located almost 60 km (37 mi) from Pripyat. It became one of the main evacuation support stations for the settlements most affected by radiation. Pripyat residents were placed in the homes of local residents, some received housing here. The Pripyat administration also moved here, and the Pripyat police department was located at the school. But after 5 years, the true scale of the tragedy began to open up. During the most active emissions from the destroyed power unit, the wind blew north and west, which saved Kyiv, located to the south. But Poliske was thoroughly “licked” by the Western radiation trail, which stretched to Rivne oblast.

Poliske gradually began to be resettled. 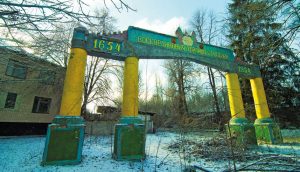 In already-independent Ukraine, a so-called “second zone” was formed, requiring unconditional and obligatory resettlement, the same procedure as for the “thirty zone”, but without a wire perimeter. Poliske, which turned out to be on the border of two infected Zones, gradually began to be resettled. Radiation levels here were relatively low, but the density is very high. There was no panicked evacuation from the village, as in Pripyat. People took their property and furniture; government enterprises appropriated state property. Personal items infected with radiation were buried in a grave near the resettled village of Bober.
By 1997, there were only 15-20 samoseli left here, firmly determined not to leave their native land. The majority of residents moved to Pereiaslav-Khmelnytskyi, where a memorial to the Poliske District was created at the Museum of Folk Architecture and Household Traditions in Middle Naddnipryanschina.