The name “Podil” derived from an Old Slavic word meaning “lowlands”. This oldest district has a long history and many legends and stories with reference to some historical places: Kozhemyaki, Gonchary, Degtyary, Biskupshchina, etc. Despite the Dnieper flooding and its steep slopes, people settled here from time immemorial. Additionally, they experienced many other severe losses: they suffered under princely feuds and from countless conquerors’ raids, from never-ending floods and devastating fires. In 1811, this district was burned nearly to the ground. But Kyivans rebuilt it every time, because of the city’s main value – the navigable Dnieper with its famous trade route “from the Varangians to the Greeks”, which allowed them to survive at all times. Later, Prince Vladimir “baptized Rus” on the same site, and this memorable event was set in stone in form of the monument to Magdeburg Law. Architecture of today’s Podil is eclectic. 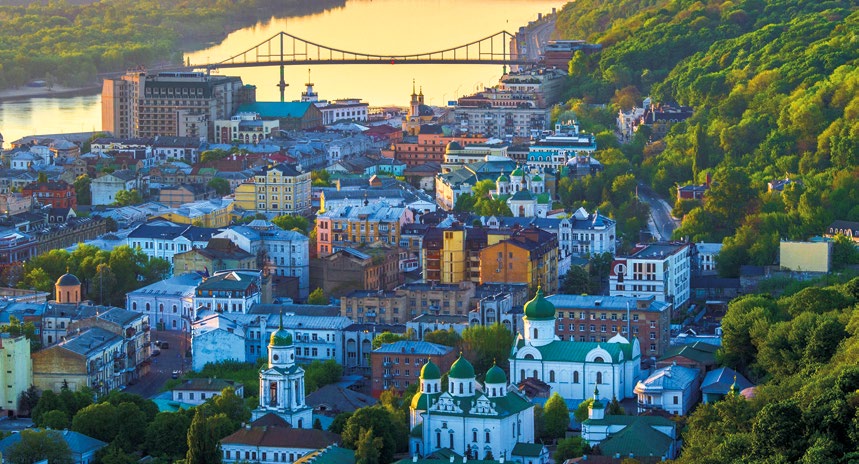 After the devastating fire of 1811 it was re-planned and rebuilt, but you can still find here the buildings and objects of different styles and epochs: House of Contracts (1812) and House of Emperor Peter the Great (early 18th century), Samson fountain with rotunda (1749) and Kyiv-Mohyla Academy (17th century), Funicular (19th century) and Church of Virgin Pirogoshchi (1136), first pharmacy-museum in Kyiv and Frolovsky Monastery. Also, there are monuments to outstanding Ukrainian philosopher Grygoriy Skovoroda and talented Hetman Petro Sagaidachnyi. But even a bare listing of Podil attractions takes a lot of time and space. In 2018, during another large-scale construction in Poschtova Square, there were found the unique archaeological artifacts that can serve as the basis for a special museum of life in ancient Kyiv. And if you just want to immerse yourself in the atmosphere of the ancient city and feel the breath of eternity, you should take a walk along the Dnieper embankment or sit in one of Podil street cafes. And you will surely feel the ancient world aura miraculously preserved in Podil, one of the business centers of today’s Kyiv.