In Orthodox countries, there are five lavras, the largest kind of monastery with special spiritual significance. The Holy Assumption Pochayiv Lavra, the second largest monastery complex after the Kyiv-Pechersk Lavra, is located on a high hill, surrounded by the town of New Pochayiv. You can get to the shrine from Kremenets (24 km / 15 mi) or Ternopil (70 km / 43 mi).
According to legend, the monastery was founded by monks from the Kyiv-Pechersk Lavra, who had fled from the Mongol invasion in 1240, but it is first mentioned in the Chronicles in 1527. 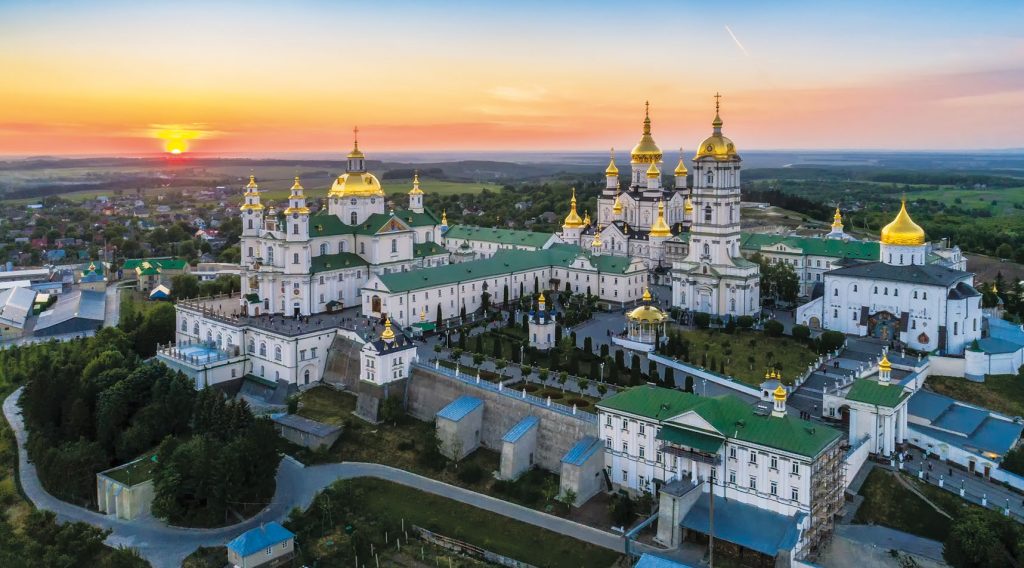 The complex was built in the traditions of late Ukrainian Baroque, the monastery buildings’ terraced composition gradually leads to the Assumption Cathedral, which dominates the lavra. Pochayiv Lavra is richly decorated with sculptures, paintings, ornaments, and shrines to which worshipers go in veneration (the footprint and the miraculous image of the Most Holy Theotokos of Pochayiv, the holy relics of St. Job of Pochayiv, and Amphilochius of Pochayiv).
The golden age of the monastery and many legends are associated with the time of Abbot Job (first half of the 17th century), during which a stone church was built and a printing house was founded. Since then, it is believed that St. Job protects this place. During the Tartar invasion in 1675, the monks and residents came together to defend the monastery and began to read hymns before an icon of the Virgin Mary; the clouds parted in the sky, and the Mother of God appeared in the golden light, surrounded by angels, with St. Job beside her, in prayer. The Turks were frightened by the heavenly sign and began to shoot arrows at him, but they reversed back towards them. From 1713 to 1831, the Pochayiv Monastery was Greek Catholic (this territory belonged to the Polish-Lithuanian Commonwealth). Under Tsar Nikolai I, it was transferred to the Russian Orthodox Church and became the fourth most important among all the existing monasteries in the Russian Empire.
In 1939, part of Western Ukraine was annexed by the USSR. The Red Army looted Pochayiv Monastery. They took away stocks of grain and livestock, and the monks themselves were banished to the street. Since 1988, a new life has begun at Pochayiv Lavra: a Sunday school opened, gardens and structures were renewed, buildings and a bell tower were restored, the road was improved, workshops started up again. At the beginning of the 21st century, The Lavra Assumption and Trinity Cathedrals could no longer accommodate all who wanted to attend mass there, so another cathedral was built in 2013, the Transfiguration. Today it is a working monastery, and Orthodox believers from all over Ukraine come to it for religious holidays. There are eight hotels and several cafes and restaurants in Pochayiv.