The interesting history of Oleksander Dovzhenko.

Oleksander Dovzhenko was a film director, playwright, writer, and artist who laid the foundation for the Ukrainian poetic film school. His most famous film “Earth” (1958) was recognized as one of the top 12 “best films of all time” in a vote by 117 world film critics, and in 1995, it was added to the UNESCO list of masterpieces in world cinema. Dovzhenko was born on September 11, 1894, in Sosnytsia, Chernihiv Province, and this date is celebrated annually as the Day of Ukrainian Cinema.
The director’s parents, illiterate villagers, having discovered their son’s desire for books, decided to give him an education, for which they sold portion of land. Dovzhenko welcomed the overthrow of the tsar and participated in the Ukrainian national liberation movement. Thanks to his education, he was sent to Berlin for diplomatic work. After returning to his homeland, to Kharkiv, he became a famous cartoonist and public figure. An invitation to cooperate with the All-Ukrainian Photo-Cinema Directorate (VUFKU) was a revolution in his life. At 32, he dropped everything and went to the Odesa Film Studio to start a new life, as a film director. His first short comedies “Love’s Berries” and “Vasya the Reformer” were not successful. Only his third film, “The Diplomatic Pouch,” demonstrates Dovzhenko’s development as a professional director. 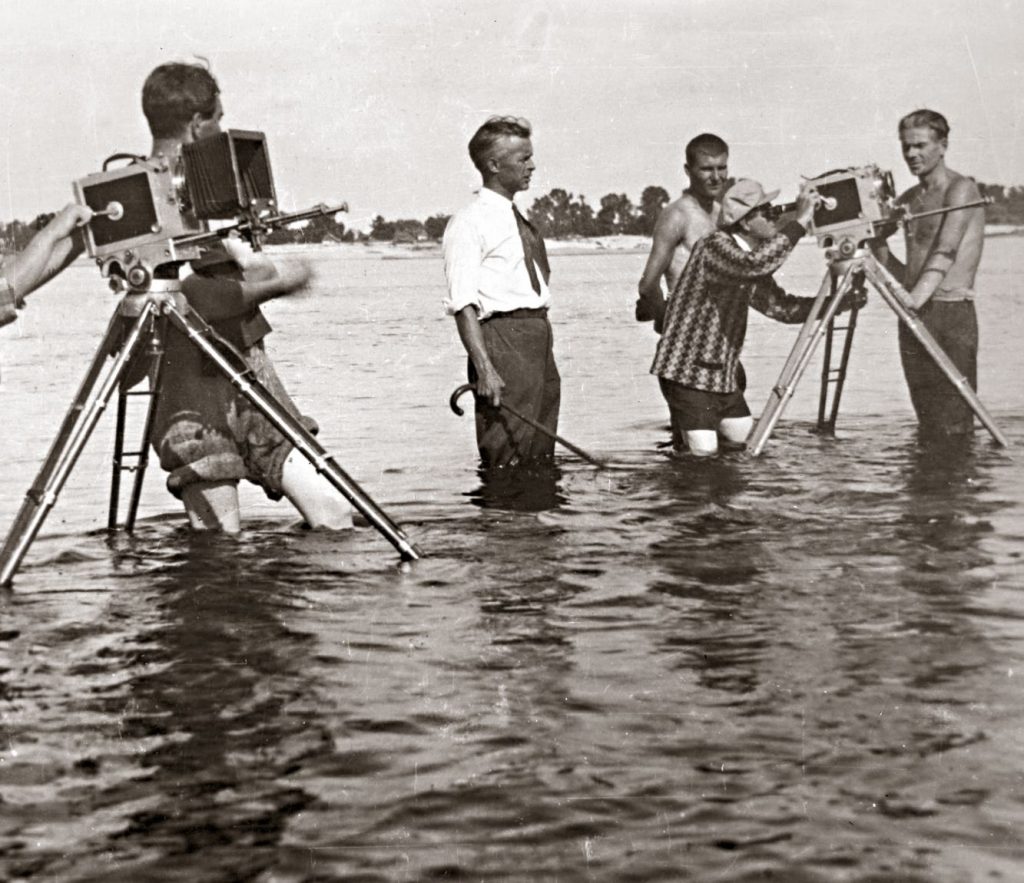 Starting with the movie “Zvenyhora,” the great master’s unique creative look, which opened a new “poetic” direction in Ukrainian cinema, becomes obvious. The director was invited to the Kyiv Film Studio, which now bears his name and where he shot his best work: “Earth,” “Ivan,” “Aerograd.” The picture “Shchors” was produced by order of Stalin. Dovzhenko did not want to do it, but this film became a “security certificate” for him. In 1934, the director moved to Moscow and taught at the film institute VGIK.
During the Second World War, the director worked on documentaries.
One of his films, “Ukraine on Fire,” was banned with the disastrous critique: “This is an incursion against Soviet power.” Dovzhenko’s last film was “Michurin,” and the film “Farewell, America” was banned before work on it was completed…
Oleksander Dovzhenko died on the first day of filming for “Poem of the Sea.” The director’s wife Yuliya Solntseva finished filming his storyboards. Dovzhenko was buried in Moscow at the Novodevichy Cemetery, although he wanted to be laid to rest in Ukraine, which he loved very much.