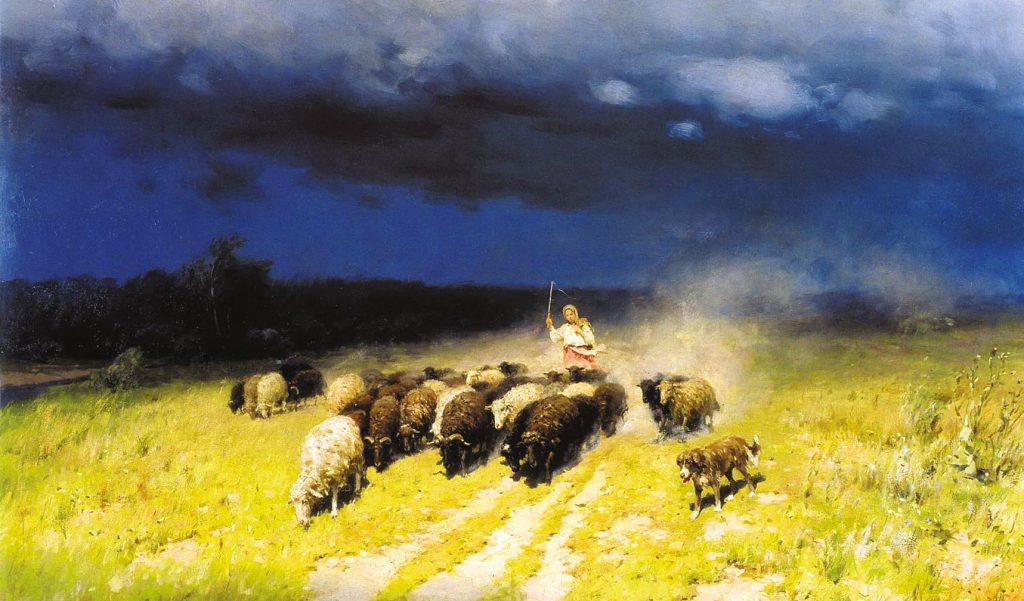 One of the most famous works by Mykola Pymonenko (1862-1912) can be seen in the St. Volodymyr Cathedral of Kyiv. He painted the images of St. Nicholas and St. Alexandra, for which he was awarded the Order of St. Anne, which, among other privileges, gave Pymonenko, the son of an icon painter and carver, nobility and the title of State Councilor, of which Gogol dreamed at one time.
It was his father’s occupation that influenced the painter’s destiny: he studied icon painting at the Kyiv-Pechersk Lavra school, where he was noticed by the famous artist Mykola Murashko. He appealed to the Ukrainian philanthropist and sugar typcoon Tereshchenko, who agreed to accept Pymonenko free of charge to the Kyiv drawing school, which he sponsored. Mykola studied brilliantly at the school, and later he taught there. Within a few years, he became a member of prestigious European art societies, including the Society of Munich artists and the Paris International Union of Art and Literature. At the age of 42, he received the title of Academician of Painting “for his fame in the artistic field.” His brushstrokes adorn about two hundred paintings, as well as over 500 sketches and pencil drawings.

Rural Ukrainian life was the main theme in the majority of Pymonenko’s work. His paintings give an idea of the existence, morals, customs, and everyday comedies and dramas. Judge by the names: “Kyiv Flower-girl,” “Matchmakers,” “Rivals. At the Well,” “Harvest in Ukraine,” “Haymaking,” “Ukrainian Night.” These paintings fascinated audiences and were highly valued by enthusiasts and experts. His painting “Hopak”, was exhibited 38in the Paris Salon and later bought by the Louvre. “Exit from church” is in the Munich museum; and his canvas entitled “Fabric trading woman” was recently sold at auction for $160,000. One of Pymonenko’s most famous masterpieces is “Yuletide fortune tellers,” a picture of two young beauties enchanting their betrothed by candlelight.
On the artist’s tomb, guarded by a white marble angel, is written, “Academician of painting.” But more precisely, Mykola Pymonenko characterizes the words from Repin’s congratulatory telegram, “Hello, the living creator of Ukraine, glory to you!”