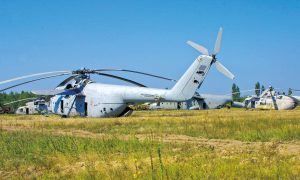 The first design of this aircraft of unprecedented size, with a 5-blade rotor with a diameter of 30 m (98 ft), appeared in 1952. And in 1954, the first version of the rotorcraft, officially called the Mi-6 (product 50), was built. The Mi-6 was considered a “new means of transporting troop units and almost all types of divisional artillery” and could carry 6 tons of cargo with normal take-off weight, 8 tons with reloading, and 11.5 tons for shorter distances. 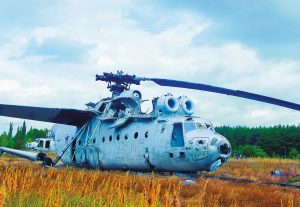 The dimensions of the Mi-6 cargo compartment are similar to that of the An-8 and An-12; the fuselage is a metal-riveted semi-monocoque. This helicopter and many of its subsequent modifications were very popular with the military and civilians, and was in demand abroad. It had a baptism of fire in Afghanistan, as part of the legendary Independent Guards Airborne Regiment, known as the “Poltinnik” (“Fifty”). The 51st GDHR, a flight squadron, began operating in the Zone during the first days after the disaster at the Chernobyl NPP, just six months after returning from the Afghanistan war. Mi-6s and Mi-6As (modified in 1971 with a maximum take-off weight of up to 44 tons) were used for transport; then they started to use an external sling and dump lead and sand into the crater of the hot reactor. Most helicopter pilots received huge doses of radiation. In Chernobyl, a large part of the Soviet Mi-6 fleet remained, including those that served in Afghanistan and other wars.