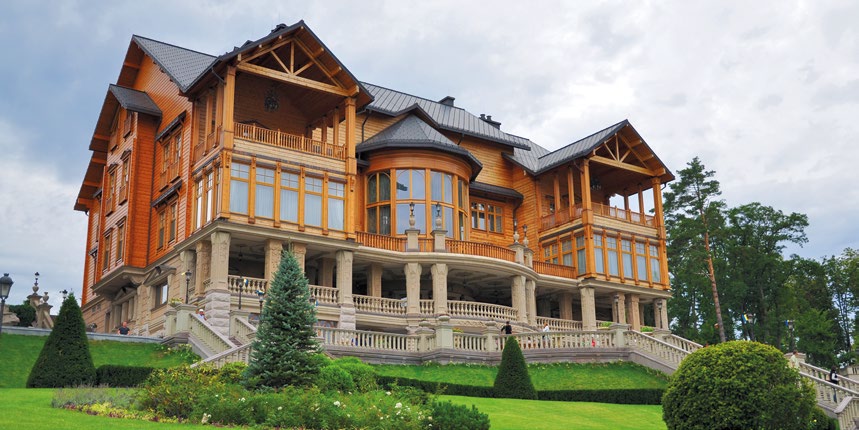 Mezhyhirya is the former residence of Ukraine’s ex-president Victor Yanukovych. After Yanukovych fled to Russia during the Maidan-2014, this 140-ha estate became a national nature park. It is located in Novi Petrivtsi village, Vyshgorod rayon of Kyiv region. The complex is surrounded by a 5-meter perimeter fence. There is a yacht pier, a floating landing, an equestrian club, a rare-breed dog kennel, a shooting gallery, a tennis court and other entertainment and leisure facilities, hunting grounds and a zoo, and several residential buildings. Mezhyhirya has become a symbol of presidential theft and even a Museum of Corruption. In the past, the land of the Mezhyhirya residence was home to a monastery which was completely demolished in 1935 – only one well remains. Fortunately, all the buildings of the monastery complex were photographed before demolition. Also, hand-written books were discovered under the ground. They are thought to be part of the lost library of Yaroslav the Wise. At that time, the capital of Ukrainian Soviet Social Republic and Mezhyhirya became a state-run residence for political and military leaders. In Soviet times, it was the residence of Nikita Khrushchev and many other statesmen of the Soviet Union.

Mezhigorye is open to all comers.

Now SPE Mezhigorye is open to all comers. The entrance fee is modest. You can get from Kyiv center by taxi, tour bus or shuttle van No. 902, departing from Heroiv Dnipra metro station. The park is amazingly beautiful. It is very difficult to walk around the whole territory in one day, so visitors are advised to rent bicycles or book a tour in a small open car. You will see a man-made lake fed by water from ten artesian wells. Near the main feature of the residence, the club-house (also known as object Honka, after the Finnish company Honka), there is an observation deck which offers a panoramic viewpoint overlooking the Kyiv reservoir, or the Kyiv Sea, as it is called in Ukraine. Going downhill you will get to the embankment, so enjoyable for walks in a cool breeze to the sound of gentle rippling waves. As mentioned before, the residence has a zoo with many exotic animals (kangaroo, Australian emu, American nandoo, peacocks, pheasants, Australian geese, earthen hare and many others) that you can feed and pat. In June 2015, a summer camp for children was opened in Mezhyhirya. For more details and current prices, visit its official website.