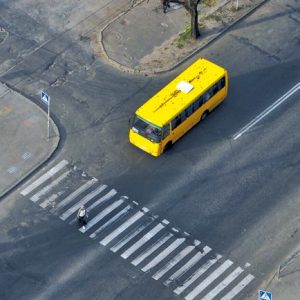 Fixed route taxi-buses, which citizens call “marshrutka”, appeared in Kyiv in the 1960s but in Soviet times they were considered rather extravagant. The fare was 15 kopecks ($0.25), which was 3-5 times more expensive than other means of public transport. By the late 1980s, they were still not very popular, but ten years later, due to the cancellation or shortening of tram and trolleybus routes, their usage boomed. Today, on the streets of Kyiv, the yellow Bohdan buses are the most common. They compete with second hand minibuses brought from abroad. Some marshrutkas are even converted from trucks — windows are cut and seats installed, which is contrary to safety standards. The city authorities do not approve! There are 154 legal routes and around a dozen that are illegal. The fare varies depending on public transport fares and the length of the route. As of now, the autumn of 2018, the cost is from 6 to 10 UAH ($0.25-0.40) per trip. There is a category of so-called “beneficiaries” who are entitled to free travel. A driver takes one preferential passenger for one ride. Drivers have travel tickets which they are supposed to hand out to passengers, but this hardly ever happens. 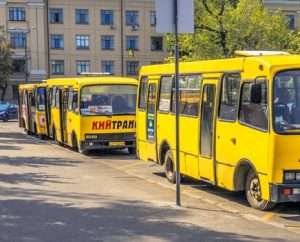 In most minibuses there is no conductor; you pay the driver. In the rush hour, the taxi-buses are very crowded, with as many passengers as possible squashed inside through all the doors at once, and payment is made “on trust.” From back of the bus money is passed from hand to hand to the driver and change goes back the same way. If a passenger gets off without waiting for the change, then it “travels” back to the driver. It is not usual to find cheating in minibuses, although in a crowded bus and especially in the evening rush, it is not recommended to transfer large notes and “tempt” strangers. The driver’s cabin of an average bus is a tiny house. Here, depending on personal preferences, you can see icons, soft toys, posters and rugs; money boxes; plastic flowers and garlands. At New Year the driver usually decorates his “house” with Christmas toys.