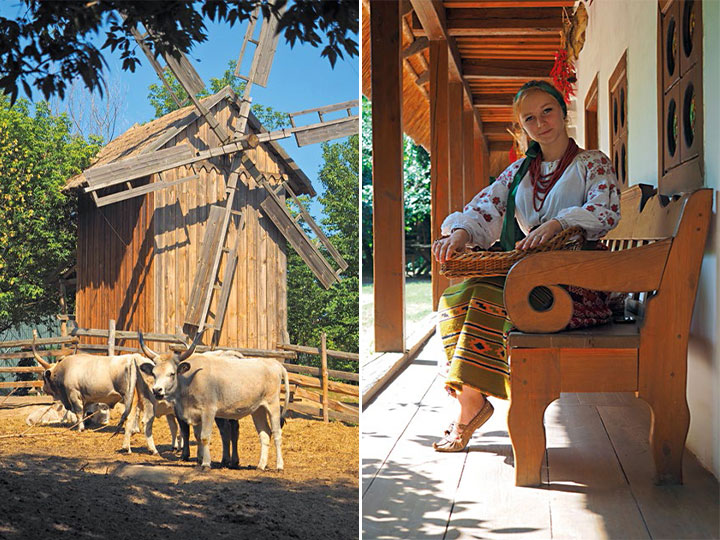 The interesting history of Mamajeva Sloboda.

The Cossack village called “Mamajeva Sloboda” is a unique feature in Kyiv city. However, it is not so easy to get there – but give it a try. From Shuliavska metro station take a taxi bus No. 201 to stop “M. Donets St.”. And then you will be amazed by your beautiful surroundings. From a noisy metropolis you, somehow have been miraculously transported to an authentic cultural complex that reproduces a Cossack settlement of the 17th- 18th century. Many people think that the village name came from the name of Cossack Mamaj, who once lived there. But this is not so: Mamaj is a generalized main character in Ukrainian folklore, pictured in many paintings. He is usually depicted, sitting cross-legged with a pipe in his mouth and musical instrument – a “kobza” – in his hands. Cossack Mamaj’s image became the embodiment of the best national features: the defender of Motherland; the object of a girl’s dreams and a symbol of Cossack spirit. It decorates the “red corner” along with other icons and was often hung in churches – especially if the founder or Maecenas of the Temple was depicted as Cossack Mamaj. These lands once belonged to the St. Michael’s Golden-Domed Cathedral and were occupied by the monastery apiary with a farm and pond. Later, gardens were planted and a park was laid out. In 1990, this land was assigned for the building of an ethnology center which took 19 years to construct. 98 copies of historic homes and buildings were reconstructed, built following original plans including tree placements and hedges. The appearance the Cossack cannons, and Cossack plates and dishes have been faithfully copied from historical drawings. Nowadays Mamajeva Sloboda receives most of its visitors during national and religious holidays when it hosts large-scale folk festivities. And on a regular day the museum organizes theme tours. Most of them are educational and interactive: visitors have an opportunity to try on national Ukrainian costumes, experience a Cossack cannon salute, ride a horse, learn the arts of bell-ringing, pottery or traditional painting and more. Or just visit the Church of Intercession of the Holy Virgin built without a single nail. And, of course, try traditional dishes in the shynok (Ukrainian restaurant).