Maidan Nezalezhnosti is the central square of Kyiv.

Today, it is rather difficult to imagine that Maidan Nezaleznosti, the main square of Ukraine, was once swampy lowland called the Marsh of Goats. That place seemed insignificant but it was over that frozen marsh in the very cold winter of 1240, the troops of Batu Khan broke into the besieged city through the Lyadski Gates. Kyiv was left in ruins. For centuries, this place remained a deserted wasteland with a bad reputation. The only signs of life was the occasionally appearance of a rough and ready market. The first stages of transformation happened in the 1830s, when first the houses were built on the street later called Khreshchatyk, from which the adjacent square received its name – Khreshchatytska. The square changed its name many times during Ukraine’s turbulent history: Duma Square, Soviet Square, Kalinin Square, Square of the October Revolution, and finally Independence Square. In World War II, the square was completely destroyed and then rebuilt from scratch when hostilities ceased. 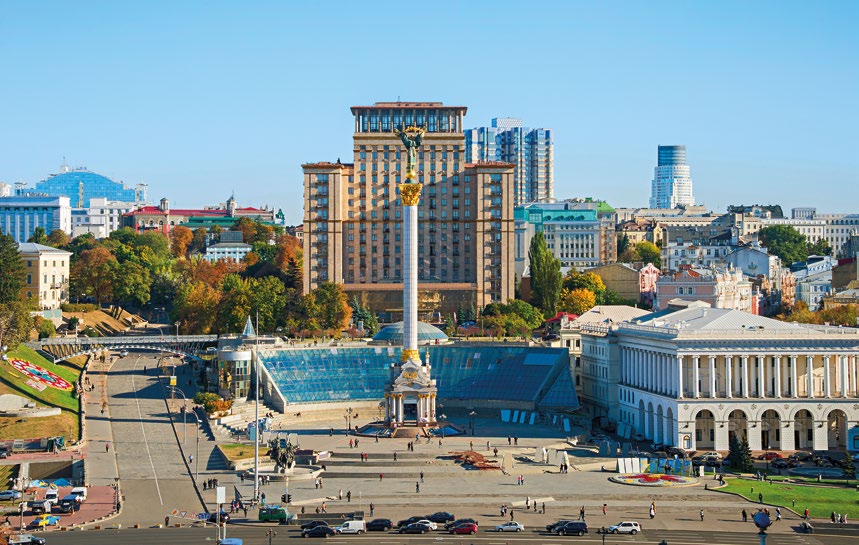 In 1991, Ukraine gained its independence from the Soviet Union and, naturally enough, the square was renamed Independence. Since the start of Ukraine’s independence movement in 1990, the square has been the traditional place for political rallies, including four large-scale radical protest campaigns: the 1990 student “ Revolution on Granite”, the 2001 “Ukraine without Kuchma”, the 2004 Orange Revolution, and the 2013-14 Euromaidan, when dozens of people were killed and hundreds were injured. The protesters put up tents to live in, so it is the tent that can be considered the unofficial symbol of Ukrainian revolutions. Maidan is also a regular site for non-political displays and events. At weekends and on public holidays traffic is banned from Khreshchatyk Street and Independence Square and pedestrians are king. Around the square are unique buildings erected in the middle of the last century. They still echo Ukraine’s Soviet past, but now this Stalinist architecture is just a memory of those times – now Ukraine looks forward to its own Independent future. The area is dotted with numerous monuments, statues and new sculptures. One of the most impressive is the Independency Column topped with a statue of Archangel Mi with sword and shield, who is the saint patron of Kyiv. Another is the 5,000 jet musical fountain called Friendship of Nations. Also, you can find the Globe Monument, with the distances to the world capitals, the Kyiv Founders Monument, and the statue “Beregynya” – a girl holding a Viburnum branch; another symbol of independent Ukraine.