This original building dates back to 1901 and is a real ornament to the city. Its author, architect Karl Schiemann, fulfilled all of his customer’s whims and created a vivid example of building in the so-called “Kyiv Renaissance” style. Back then it was the tallest building in Kyiv. With its very interesting turret it towered 42.5 meters above the rest of constructions and buildings, and literally hovered over the city. But we are talking about a residential house, not just about the belfry. After its consecration, this “skyscraper” housed the furnished rooms of a Palermo hotel type; and there were also shops and restaurants here. The building was mentioned in Mikhail Bulgakov’s novel “The White Guard” for Marquis Cafe, best known for its excellent pastries, cakes, tarts and sweets. Soviet government made miserable adjustments to the house’s life. The editors office of “For Soviet propaganda and agitation” magazine was housed in the former furnished rooms, and many other rooms were converted into various office premises. But it was here that the Czech writer Jaroslav Hašek, a former soldier of the Czechoslovak Legion, whom vicissitudes of the WWI and the Civil War brought to Kyiv in the twenties of the last century, was working on the first chapters of his great “Soldier Schweik” (Švejk). 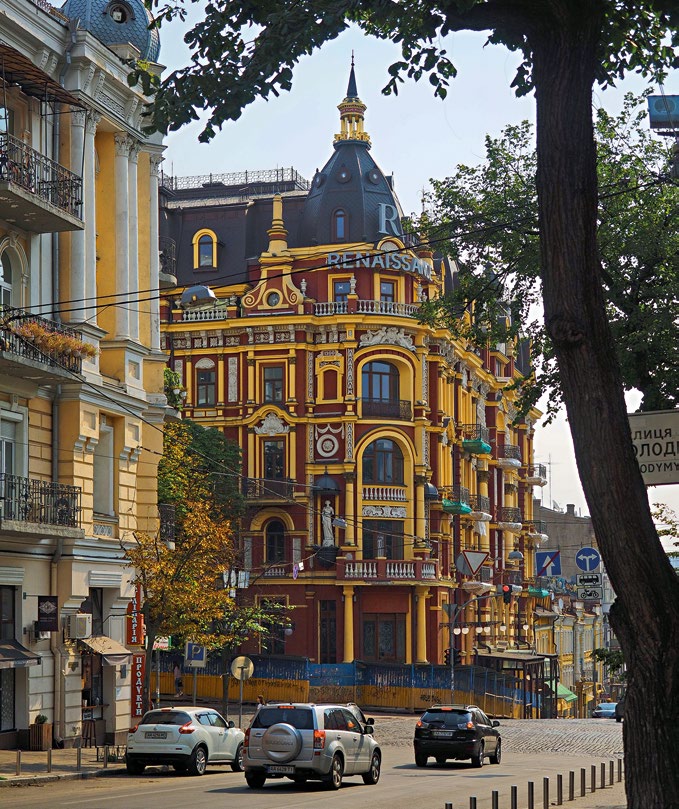 After WWII the cocktail lounges, the first-class restaurants – “Chaika” (“Seagull”) and Leipzig, were set up here. Although there was no turret anymore… Then the restaurants were shut down, and tenants of other premises had to move out. Since 1990, the once magnificent building had been deserted and destroyed. More recently it has been restored, but not to its original form though. There are plans to rebuild this house as a five-star hotel for 220 rooms. The building proves key in shaping the unforgettable architectural silhouette of the ancient city. Kyivans and guests of the capital city appreciate this building for its originality.