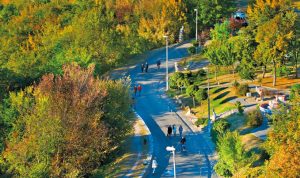 Landscape Alley was designed by the famous architect Abraham Miletskyi.

Landscape Alley is a normal road which follows a line of defenses that used to protect the part of the city where Kyiv Princes lived in the time of the Kyivan Rus. The Alley starts from the meadow in front of National Museum of History of Ukraine, near an ancient (300-400 y.o.) linden tree, and ends by the buildings 36-40 on Velyka Zhytomyrska Street. Landscape Alley was designed by the famous architect Abraham Miletskyi as part of the History and Architecture area “Ancient Kyiv”, created in the Old Town’s territory in the late 20th century. However, only the 1.48-ha alley project was the only thing built in the early 1980s. This place was chosen because the ancient hills of the Upper Town command imposing views of historic Kyiv. It is these impressive landscapes that gave the Alley its name, and it is an excellent observation place to see famous Podil and the mighty Dnieper. At the start of Landscape Alley there is a staircase connecting it to the picturesque Vozdvizhenka Street. This wooden staircase was built for the Moscow Olympics 1980, and in 2018 it was completely renovated. It wasn’t until the year 2009 that the unique park was created, with its unusual playgrounds, fountains and sculptures that made it into the corner of Kyiv like no other. The thirty-meter-long wall was adorned with a bright mosaic picture of a long centipede cat in whose “jaws” children like to be photographed. Pyramids, built of many-colored blocks and crowned with fairy-tale angels, also adorn the Alley. And near these pyramids one can see the cheerful elephant fountain and the zebra in love. Take a seat on one of the unusual animal-shaped benches and contemplate these strange things! This fairy world in Kyiv’s downtown was created by the famous Kyiv city sculptor Konstantyn Skretutskyi. 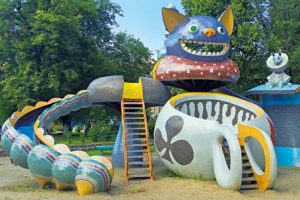 The “Alice in the Wonderland” playground, with carousels and slides shaped like the characters from the fairy-tale, is a magical place for kids of all ages. Further along the alley there are some other playgrounds with giant taps with eyes, snake pipes, roof-shaped benches and swings, an equestrian monument to Prince Svyatoslav, a number of famous peeing boys (!) … and much more – such as the beautiful graffiti-riddles murals.