Four such lands are known in the world: the first is Iveria (Georgia), the second is Holy Mount Athos (Greece), the third is the Kyiv-Pechersk Lavra, and the fourth is the Serafimo-Diveevsky Monastery (Russia), which originally was also in Kyiv. In Orthodoxy, there is the notion of “the destiny of the Blessed Virgin,” or the “lot” of the Mother of God – that is, land under the Virgin Mary’s special patronage.
Legend says that the Mother of God revealed to the abbot of one of the Athos monasteries that the monk Anthony, a native of Chernihiv principality, should return to Rus’. Obedient to her will, Anthony came to Kyiv, where Yaroslav the Wise ruled, and, in 1051, he founded a monastery. While building the Church of the Assumption of the Mother of God, one of the oldest non-manufactured images of her was found.
Relics of saints are kept in the Near and Far Caves of the Lavra; a pantheon was established in the Lavra for prominent lay people who have found eternal peace here. 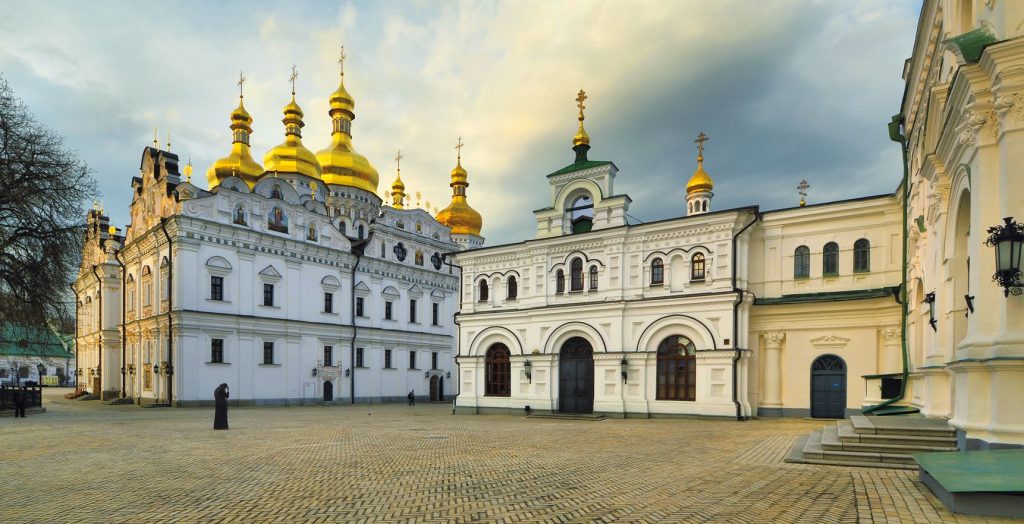 The fate of the Kyiv-Pechersk Lavra was not easy.

However, the fate of the Kyiv-Pechersk Lavra was not easy. In ancient times, it repeatedly experienced devastating raids by the Pechenegs and Cumans; suffered ruin from the troops of Suzdal, Chernihiv, Smolensk, and other principalities; and a terrible defeat in 1240, when Kyiv was captured by the of Mongol-Tatar hordes of Batu Khan. The Mongol and Tatar raids continued over several hundred years, until the mid-15th century, when the Crimean Khan Menglis-Girei plundered the Lavra. After several centuries of relative calm, the 1917 revolution and subsequent decades of struggle with religion and the propagation of atheism in the USSR began, when part of the monks were exiled to camps, and some were shot.
However, despite all these terrible historical events and several periods when the monastery was completely closed, the Lavra was constantly reconstructed and, in spite of everything, it became more and more beautiful. In 1990, it was listed as a UNESCO World Heritage Site. The outstanding monuments of architecture and history include, first of all, the Gate Church of the Trinity, the bell towers in the upper territory and in the Far Caves, the Church of All Saints, and the Refectory Church. For the 950th anniversary of the monastery in Ukraine (by then independent), the Assumption Cathedral, which had been blown up in 1941, was rebuilt.
The Lavra’s grandiose complex of temples, bell towers, and office buildings is striking in its beauty and magnificence. Every year, more than 45 million tourists from around the world visit it, not to mention worshippers.