The decision to build the Kyiv metro was made back in 1936 but the preparatory work was abruptly halted with the advent of war, in 1941. Although much of Kyiv was bombed to ruins after WWII, the postwar reconstruction plan, included the Kyiv metro. Although the resolution to build the Kyiv metro was passed by the Soviet government in February 1945, construction only began in August 1949. It was decided that Kyiv would have three main lines: Svyatoshyno-Brovary, Syretsco-Pecherska and Kurenevsko-Krasnoarmiyska (now – Obolonsko-Teremkivska). The first connection between stations was made between Dnipro and Arsenalna in December 1951, while the last was between Vokzalna and Universytet stations in May 1959. The first 7 stations were in Stalin style – i.e. with plenty of Communist symbols – blended with traditional Ukrainian motifs. 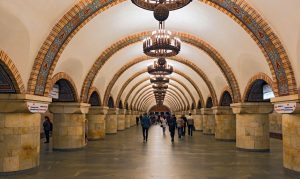 The first stations were very colorful and richly decorated. Three different types of granite were used, as well as marble and majolica and other ornamental stones. Khreshchatyk station was particularly beautiful faced in yellow-pink marble and decorated with majolica decorated pillars in Ukrainian national style. Bright and vibrant colours dominated – red, orange, bright yellow and gold. In 1986, the station became a local heritage site. Golden Gate station made it into the top 22 most beautiful metro stations in Europe (as the Daily Telegraph reported in 2012). Today, Kyiv metro system is represented by three lines, with both above ground and underground sections, and comprises 52 stations. You can pay for a metro ride with a token (one token = one ride) and costs UAH 8.00 (as of August, 2018) which you buy at the cash desk counters. Alternatively, there are also special ticket vending machines at some stations. Here you can purchase a “contactless card” which can be loaded with money – enough for up to 50 journeys – and which allows you to reduce the single ride cost to UAH 6.5. It is also possible to purchase a monthly pass for unlimited rides.