Who founded Kyiv and when? This question is ever-present in scholarly minds. Archaeological excavations show that settlements in the Kyiv region existed 15,000-25,000 years ago. Claudius Ptolemy wrote about the mysterious capital city of Sarmatia on the Dnieper, and another legend says that the emergence of a large city on the hilly banks of the Dnieper was predicted by Andrew the Apostle who traveled through Ukrainian lands in 55 AD. The traditionally recognized year of Kyiv’s establishment is 482 AD. According to the 12th-century chronicle “Povest vremennykh let” (“Tale of Bygone Years”), Kyiv was founded by three brothers, Kyi, Shchek, and Khoriv, leaders of the Polyanian tribe of East Slavs. Each established his own settlement on a hill, and these settlements became the town of Kyiv, named for the eldest brother, Kyi. A small stream nearby was named for their sister Lybid’. The Tale of Bygone Years by Nestor the Chronicler says that: “The Polyanians lived apart and governed their families. 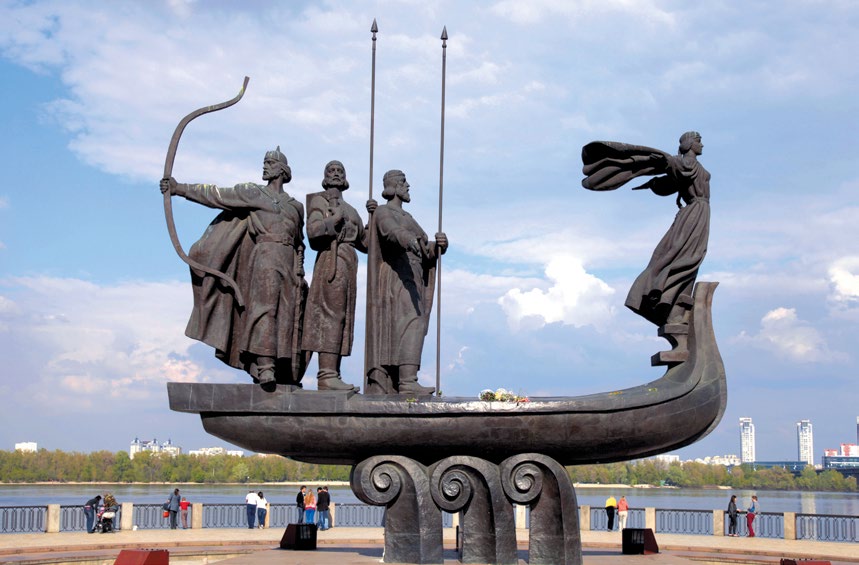 There were three brothers, Kyi, Shchek, and Khoriv, and their sister was named Lybid’. Kyi lived upon the hill where the Borychiv trail now is, and Shchek dwelt upon the hill now named Shchekavytsa, while on the third resided Khoriv, after whom this hill is named Khorivytsa. They built a town and named it Kyiv after their oldest brother. Around the town lay a wood and a great pine-forest in which they used to catch wild beasts. These men were wise and prudent. They were called Polyanians, and there are Polyanians descended from them living in Kyiv to this day… Kyi was then the chief of his kin, and it is related that he received a great honour from the Emperor when he visited the imperial court… Kyi returned to Kyiv, and soon after his life came to an end. His brothers Shchek and Khoriv, as well as their sister Lybid’, died there too.” And to this day, on the maps of Kyiv you can see the three mountains – Kyivytsa, Schekavytsa and Khorivytsa, as well as the Lybid’ River, after which the metro station is named. There are also a great number of mosaics and images of Kyiv’s founders, most of them displayed when Kyiv celebrated its 1500th anniversary. In 1982, a statue of Kyi, Shchek, Khoriv and Lybid’ standing on an ancient riverboat was unveiled at the riverside of Navodnytsky Park. The monument, created by Vasyl Borodai, soon became iconic for the city and has since been used as Kyiv’s unofficial emblem. Kyivans call it “Boat”. This is the favorite place for newlywed photo shoots, and every bride feels it her duty to throw a wedding bouquet into the boat to attract good luck.